In The Company of Serpents Of the Flock 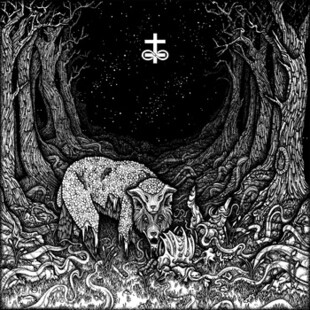 We reviewed these guys back in June last year and moving on from their self-titled tape, they've only gone and done a bloody 12".

This suits their sound just fine, a two-piece but with a weightier, meaner sound than you'd expect that would achieve this is doom done in monolithic, smoke-wafting majesty. The cover features a bleak void-like tunnel and listening to the music feels like descending into that mysterious, bleak darkness for kicks.

Given as much room as they have made for themselves here, the undeniable centrepiece here is the ten-minute Blood From Stone which moves with glacial elegance with some Burning Witch-esque tone that will uproot trees if played at the right volume. Imagine that, music that can change the very scenery around you, woah.

Previous to this, the mid-paced and rumbling Craven sets up the sound with a few marble-heavy riffs of its own and vocalist Greg's throat-rendering groan rasping all over it. Fantastic.

Production comes courtesy of the ever-reliable Billy Anderson, giving it that fuzz-driven, overwhelming unpleasant sound he seems to grace everything he touches.

More chuggery and guitar abuse raises its head on the more confrontational title track, with the vocals not following the ebb and flow so much, giving it more of a battle-cry feel. The influence of bands like The Obsessed are still there, but there's also maybe a hint of the old post metal about it too, these songs feel more developed and of a prog-esque bent than their previous material, but not so much that you'd notice right away. On repeated listens, the repetitive grooves give a sense of some intelligence in the songwriting process even if the overall image and delivery is primal and angered.

Acoustic guitar and some creeping feedback announce the start of the final track here, which sounds pastoral and otherworldly. If you could distil the essence of black metal's Wolves In The Throne Room and their slightly eco-warrior standpoint and funnel it into a more substantial sound, this would probably be it.

Available with some fantastic artwork and coming with mp3s to download too, this 12" is just incredible and we'd urge a purchase. You've missed the chance for some screen-printed poster action, but the overall package alone is worth picking up.