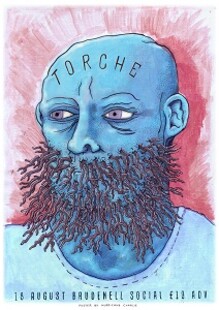 A school night trip to another city to see a gig isn’t always tempting, but when the band is of the calibre of Torche, and the venue is one of the best in the country, then the decision becomes easier. So up the M1 we headed en route to the Brudenell Social Club.

Leeds locals Shields were due on first, and seemed a no brainer for choice of support. Some bands seem to meld numerous myriad influences to forge their unique sound, while others lay their chips down all on one number. Shields are definitely in the latter – with Torche being their blatant godfathers. I was looking forward to seeing them – the similarity didn’t bother me when I heard their recorded stuff and they have a strong catalogue of songs for a band in their early stages. But it’s not long into their set before that no brainer decision seems to have been made at a bit of a rush – that the similarity to the headliner does make it a bit uncomfortable, predictably I suppose when you think about it. That’s not the only problem – the vocals are forced through and way too high in the mix – it’s not picked up by the sound guy nor the vocalist, and it deadens the impact of otherwise great, riff happy songs such as Your Name is Mudd. Disappointing, but with a caveat, I aim to catch them when they play Sheffield soon to properly judge them as a live outfit.

The comically named Fat Goth are on next. Never having even heard of them before the gig, I had worries about the comic name, imaging some piss around pop punk troupe, but they were actually a nice surprise. Instantly tight, they stood out from the mixing mess of Shields instantly. A three piece from Scotland, they played angular punk-y indie-y rock, a blend of Winnebago Deal meets Therapy? meets Part Chimp, with an occasional Weezer-esque breeziness. It isn’t my thing, but their quality was undoubted and they were enjoyable to watch. 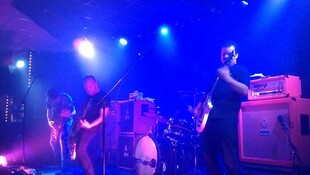 Torche finish things off, returning to the last venue I saw them in, since when they’ve put out more of the same startlingly good, original slabs of pop laden doom. Any misgivings about being so far from your bed late on a Sunday night quickly dissolve as they kick into tracks from In Return, blowing your head back with the title track in particular. It’s not long before you are reminded of how this is a truly special band, one of the best around and with a distinctive sound of their own. I have been attending a lot of gigs this year, trying to make up for a fairly fallow 2012, and it dawned on me as the adrenaline rush of Healer gets the whole room bouncing along that while attending any gig is the best night out you can have, going seeing one of your favourite bands, on form, is a step above. 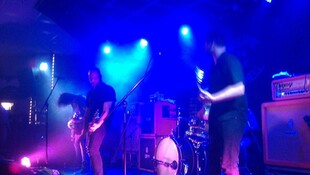 Thankfully happy to play songs from across their back catalogue, you’re not bemoaning the high percentage of tracks from the latest album as with so many touring bands. I’d actually liked more from Harmonicraft, the only disappointment of the gig being the lack of the track Sky Trials. They end the gig by changing guitars and firing up the pedals to create the rolling thunder rumble from their self titled album, the riffs from their early output knocking you back and churning your stomach as they do on record, yet more so. It’s a fantastic performance from one of the best. Long live Torche.