A Tree Of Signs Salt 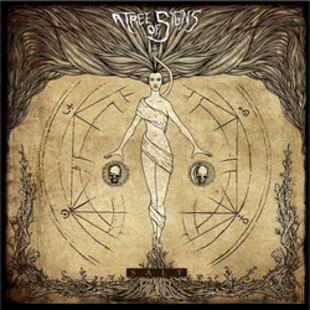 A Tree Of Signs seem to be Portugal's best retro doom band.

They move with a steady, unfaltering gait and their sound is pure Sabbath. With a fuzzed-out outlook to their sound, the female vocals are a welcome diversion and combined with some understated keys it makes for a fascinating listen.

The more mournful parts remind me of miserablists While Heaven Wept but ATOS have their own methods.

What is immediately noticeable is the unorthodox drumming. Tapping out an insistent constant at points where it doesn't call for it and seemingly leading the rest of the band to some strange signatures, it's a unique sound that weirdly works. It's not out of time by any means, but it's certainly not conventional. On Book Of Silence for example there points at which it almost seems like drum solos are peppering the sound, the guitar takes a back seat along with the chanteuse and it only compounds this strange sound further.

The keys are another interesting element, creeping in only now and again, they add to the feeling of the occult. Chiming in at certain points, it adds to the atmosphere. Seeing this band live must be haunting, the stark and almost hollow sound they create is immediately atmospheric and dark.

One to look into if unusual instrumentation is your bag, but equally fans of doom will be intrigued by the unusual setup too. They take tropes of doom metal and classic rock and meld them into an almost ritualistic sound that conjures up images of blood sacrifice and naked folks chanting and dancing in fields of corn. Their press says they are influenced by the magic of the 70s, I'm guessing its the 1670s.

Forums - Reviews and Articles - A Tree Of Signs - Salt