té Therefore The Illusion of Density Breach, the Tottering World 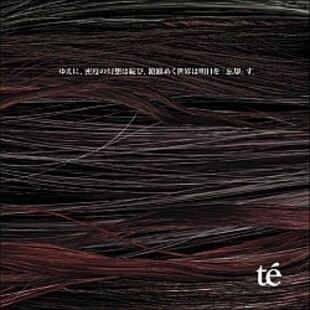 With a line in song titles that rivals that Fiona Apple album from a decade ago, té are a post rock troupe from Japan.

That's not to say this is crescendos by numbers, far from it. Having toured with the likes of 65daysofstatic and claiming influences from UK bands such as Kong, Maybeshewill and acts of that ilk, té are as unique and inventive as those they seek to take inspiration from. With wild guitars flying off in all directions, this is far from the plodding, elegant sound that is conjured up too often these days by post rock bands who play it safe. This is time signature-challenging stuff, lots of staccato riffs and changing moods through the length of single tracks.

At times they sound like the soaring and triumphant sections from Red Sparowes material, but then will throw a mathy curveball your way, bringing to mind the stop-start catharsis of bands like Don Caballero or Scottish post-whatever band What The Blood Revealed. It's got screaming sections of e-bow abuse as you'd expect, but not in the 'foot on the monitor' way you'd expect, rather these sections underpin and guide the tracks, keeping what can be an overloaded and sluggish genre interesting.

Picking out individual tracks here would be foolish, in a similar way to the over-complicated habit Red Sparowes got into from their debut, the song titles stretch on forever. It's the equivalent of taking the 'A long time ago in a galaxy far, far away...' opening from Star Wars as a song title, a little pretentious but then it's probably better to add a layer of mystery to songs so epic. An example here is With the fluctuation of a string, is spun a pattern of diversity, so the transient ensemble plays this sounds like it's taken from a textbook, but gives the overall aesthetic you need, epic, of vast proportions and aiming high.

té have only released this over here, but their previous four albums have done incredibly well in Japan, the band having been around since 2004, so if you like this I'd urge you to investigate their back catalogue. There's plans for them to come over here and tour, so keep an eye on the live dates.