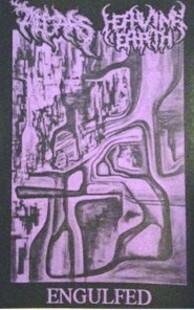 Altars are the Aussies here, and they play a blackened death metal that chugs along admirably. The drums sound like they are constructed from biscuit tins and it sounds like they recorded each section in separate rooms while the recording engineer walked between them, poking the mic into the room he liked the sound of the most every ten seconds. A burst of lead guitar here, a bit of the drums there and the vocalist seemingly following him around, absurdly brilliant.

Heaving Earth from the Czech Republic are sadly more tech, preferring to record in the same room. It's slightly reminiscent of Origin or Dying Fetus. Lots of blasting and lots of sweeping from the geets. The vocalist seems to be doing the whole scrunch up your entire face-face to record this. It's proper nerd-death for sure, epithets like br00tal and tr00 can be applied here, it's suitably grim and is the kind of thing you can imagine being played at sweaty virgin fests such as Blastonbury or one of those Czech festivals where they have seemingly one sound for the entire weekend and as many 'disgusting' band names as possible.

Altars are a band worth tracking down if only for their amazing recording methods and black metal leanings, but this tape is available from Nihilistic Holocaust Records now, presumably run by someone who lives in a graveyard.