..And You Will Know Us by the Trail of Dead Lost Songs 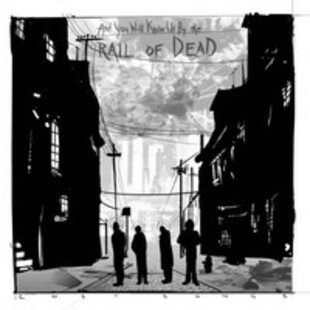 It's not as good as Source Tags and Codes. Let's get that out of the way. It just isn't. Few albums are and this isn't one of them.

Madonna comes close and is likely to be most peoples entry point for ..Trail of Dead (or 'ToD' as I'll refer to them from now on as I type these reviews in Notepad so no autocomplete) but nothing much in the early 00's came close. Fortunately, after the downslide that began reasonably gently with Worlds Apart and increased in severity over the following 2 albums, Lost Songs carries on the upswing in quality fans hoped for after last years adventurous and largely successful Tao of the Dead.

Personally, this is important. I gleefully ignored the bemused panning that critics gave Worlds Apart on release and bought it anyway. I listened to old school prog, I could handle a little experimentation. Besides, this band were incredible. I handed over my money and took the disc home. It was a crushing disappointment. I think I listened to it about six times since it came out and haven't given the band any time since then.

So it's against this background that word reached me of a new ToD album, a streamed song for the listening and a return to form. The formula for some of their best songs is still in use (although the mid-song meltdowns now sound much more polite) and the emphasis is on the high tempo, punkier songs they do so well, and despite their obvious prog influences, there's nothing on here that crosses the 5 minute mark. In short, the album is largely composed of all the sun and beer drenched elements that made me like the band in the first place. Yay!

There are a few negatives to the album. Catatonic is based around one simple guitar riff which is repeated ad nauseum throughout and isn't what you might expect from a band known for making challenging music. A couple of other songs come and go with little impact and you're left wondering why this isn't an amazing ten-track album instead of a very good 13 track one (see note below). And while the album is as alternately energetic and heat exhausted as you remember them, there's nothing as immediate as Mistakes and Regrets or as emotionally wrought as Another Morning Stoner on here. They also sound oddly like other alternative bands at times, I picked out Sparta and Youthmovies among others, although that may just be a sign of how far their influence has rightly spread since 1999.

So after almost a decade of being little more than a fond memory, Trail of Dead are back on regular rotation, if not quite back up to the heady heights of '02. But then if you shat out gold plated masterpieces on cue, I'd probably get bored of that pretty quickly too. Some people are never happy are they?

(Note) I'm listening to disc 2 of the special 2 disc version with a slightly different tracklisting and between track segues. The sight difference between the 2 discs is needlessly confusing.

Forums - Reviews and Articles - ..And You Will Know Us by the Trail of Dead - Lost Songs