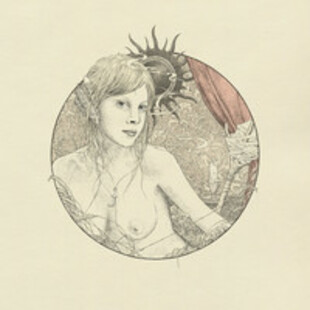 It's such a shame didn't listen to this on the day that I was sent it, which was All Hallow's Evening, as I could have wired it up to my door bell and scared the crap out of the little buggers that dared to darken my door.

Such is the power and force of this record, that little children will be frightened of the cacophony of sound that will greet them on this eponymous creation.

Imagine if you will, three men of the apocalypse, tucked away in a dark Norwegian castle huddled around a melting pot like the witches in Macbeth, throwing in a bit of Sunno)), with a pinch of Neurosis, flavoured by Sleep and for added taste a smattering of Black Sabbath. The pot boils away whilst Kristoffer, Trond and Tomas stir it up slowly waiting for the potion to be completed.

When it’s ready, howls of dark laughter immerse the castle; it is ready my children, ready to be unleashed upon the miserable and unsuspecting public. You can almost imagine the high lord of evil himself sat on his fiery throne, listening to this and acclaiming that his work on earth is now complete. This really is THAT GOOD!

Before now I’d never heard of Sunswitch, but these three guys have left a lasting impression on me already as their dark, atmospheric songs strip you down naked and leave you begging for mercy. Their chilling guitar sound and thumping drums on Concorde take you up and down to places that you've probably never been to before, and that’s before the exceptionally heavy bass sound permeates through your body before it rips your soul out and carries it away back to that scary castle in the middle of a gloomy Norwegian forest.

It has to take something special for me to sit through almost four songs that last a whopping 47 minutes, but whereas some post rock journeys leave you feeling tired and drained and willing them to end, the masterpiece that is Another Avenue just makes you want to join with the dark forces that Sunswitch have concocted. You will feel the need to spread the gloominess with everyone that you know, infect them with such haunting melodies that the post-apocalyptic sounds seep into their pores and they become a true disciple of Sunswitch.