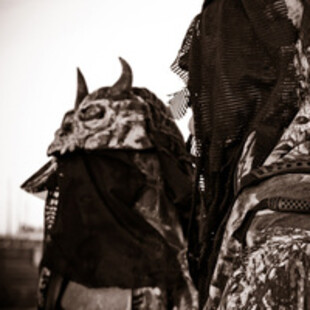 The release begins with sleazy electronic beats over something like Godflesh. It partially feels like two very separate things being played over one another, yet also gels somewhat nicely as the slow abrasive guitars rise and fall, and the bleeps trundle on, detached and aloof. In the more grindy sections, then things are kept bludgeoning and muddy, with speedy riffs, downtuned bass, and a nice gutteral crusty roar. Unfortunately, the blend of industrial grind and electronica don't arise as much across the album as I'd hoped, and tends to lapse more into straight grind, punctuated with interludes of electronic bleeping, or groovy sludgy riffing.

There are definitely a lot of cool ideas being thrown around, but I'm not entirely convinced they're being developed to their full potential, but at least it's varied so it never gets dull, yet the myriad little stylistic shifts also blend together rather cohesively across the album and avoids the disjointed trap that many post-Bungle bands fall into.

Simultaneously, it never gets truly exciting either. It's certainly got a lot of groove to it though, and the recording is very crisply played and produced, with clinical drum machine beats propelling the sound along.

Definitely one with much potential. Listen here, especially if you like the sound of industrial-grind.