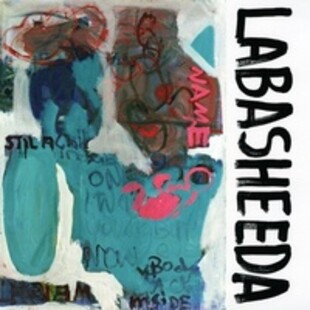 Labasheeda are a dutch three-piece who pack more ideas onto their new album than you'd imagine possible.

Having had this on heavy rotation since I received it a while ago, it's one of the most interesting releases we've been sent this year.

Driving, yet inventive and experimental, it spans a wide musical remit, taking in stoner rock along the way, but with post-punk ghosts of Sonic Youth, The Breeders, Pavement and all sorts on here besides. The singer and guitarist Saskia has a voice that will remind you of British 90s indie a la Elastica, Sleeper and Lush, but her lyrics and variance of delivery will consign those comparisons to the wayside. The band also move from quite awkward passages to epic, full-on acidic freakouts at the drop of a hat too.

The cool and calm Detective Song plods along with a subtle and excellent bass sound, but grows into a steady and paced rocker as it gets going, Labasheeda gradually increasing the volume deftly to create an almost film-noir effect. Same goes for Light Blind Dark Intentions where the band launch into that perfect, restrained style that Slint cornered back in the 90s, but with these oddly out of place vocals all over it, giving it an unsettling quality.

The band constantly pull out other strings to their bow too, the string-infused Double Exposure sounds jarring compared to the rest of the album, its jerky, off-kilter stylings offering something odd, but it works. The following track Fake Italian sounds like Slint with a bottlerocket placed in a strategic location which means Labasheeda make the sound their own.

Tippy Toes sounds slightly riot grrl, but the repetitive guitar lines could well be lifted from the 00s-era Fall albums where they sound like a garage band, which equally, is no bad thing.

The band are totally unique and a quick scan suggests this is the latest in the growing discography of a highly-prolific bunch. Available either on green vinyl or as a digital download here, Labasheeda are an oddity you'd do well to let into your life.