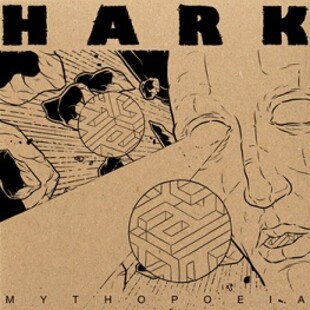 When Taint announced that they were to be no more following their split in September 2010, fans were left in mourning after the Swansea Power-sludge-metal legends left a legacy of 16 years of relentless live shows and a back catalogue that in many opinions, gave Torche a serious run for their dollar.

Fast forward to July 2012 and Jimbob Isaac, Taint’s ever-sweating, beast of a guitar player and wolf man of a vocalist, returns with Hark, a fierce power trio that clearly bear resemblance to the previous band. They have, so far, kept it short and sweet with a debut release of two songs for a 7” entitled, Mythopoeia.

The first track is a severe powerhouse of boulder-like sound that encompasses all listeners from the moment it rockets out of the Matamp speakers. Named after the release itself, this track is one serious banger. All the best bits of Taint are seemingly stitched into the tapestry displayed here and if I may be so bold, the vocals and lyrics are even better than before.

Overall sounds produced here are absolutely belting, like being caught in a hailstorm where the stones are actually skulls and the rain is blood. Technicalities in Jimbob’s guitar playing are still as strong as ever, slides and double-stopped riffs which we all know and love, as well as super-charged bass lines which are more prevalent in Hark than previously in Taint.

Track 2 fades in with a riff that possesses more power than a pissed off Greek god, the vocals steam back in with force akin to that of the cockpit of the 747 that hit the first tower on 9/11. The riffs are aplenty here. You cannot get bored from any part of this release, the guitar solo that snakes its way in towards the end of the track brings in all of the heaviest runs as well as having a heavy 70’s influence on the entire track.

Jimbob has also turned out to be quite the dab-hand with the old artwork on the front of the new 7”, packaged in a brown-black colour way, the artwork is exceptionally fitting to the music contained. Each one is silk-screened and numbered...strictly limited to 300 copies. This is exactly how it is done folks this is the only purchase you should be making this year.

Having been fortunate to have witnessed Taint ruin everyone’s brains in Liverpool in 2010, I wondered what would come next following the split, would he really have the heart to sell off all his gear? Quit for good? That 70’s SG he played through a serious-looking Matamp? Would it all be propped up in the garage for 20 years as something to show the grandkids along with hard copies of ‘Secrets and Lies’, ‘All Bees to the Sea’, ‘The Ruin of Nova Roma’, numerous splits and compilations?

Taint left some gargantuan shoes to fill back in 2010 and a legacy that will never be forgotten. Jimbob must have known that we all needed Taint’s earth-shattering sound in our lives, with Hark he has added a V12 engine to the Taint sound, filled it up with King-Cobra venom and put his foot down.