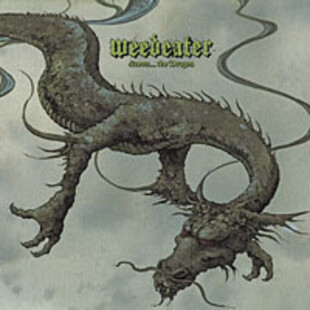 When someone says, ‘I totally shot myself in the foot with this...’ you tend to imagine them saying something really fucking stupid to the wrong person or dropping the bomb in the wrong place or time.

Weedeater’s fourth recording was stalled in its release due to exactly that, not a case of a band member saying something dumb but ‘Dixie’ Dave Collins, the bands front man, bass player and all-round terrifying redneck, blowing his own big toe off with his ‘favourite’ shotgun. Only in America kids...

Jason...The Dragon is the album in focus here and my god the name is as good as the content, if this isn’t one of the most blinding pieces of sludge-doom-metal created in 2011, then I’m not sure what is.

Beginning with a strange and ethereal voice that creeps in announcing The Great Unfurling, this is the gateway for a groovy, heavy as lead bass riff played that gets doubled up with guitar and trademark raspy vocals that sound like sandpaper on your eardrums, named Hammershandle, the shoe certainly fits.

Mancoon swings in next, filling the speakers with the same Weedeater sound you expect albeit slightly faster than previous. I’m not 100% sure what a Mancoon is but the image is pretty twisted and not one of a load of old farts sat around a swimming pool, short but sweet.

As Turkey Warlock begins, the pace is slowed back to Weedeater pace and another blistering riff smashes in, this is where the band are clearly in their comfort zone and it’s a zone millions have tried to enter and failed.

The album’s title is that good that when it also features on a track, you know it’s going to be a good one, the song builds with a solid riff that is utilises the same structure as the second track, and big bass riff then doubled up on guitar with monstrous drums thundering in. The lyrics are also special with the second line ‘I’m right behind you, you smell like fuck’. This could be the greatest lyric of all time right here. Who smells like fuck? Do they smell like intercourse or do they actually smell so bad that it’s like fuck? Who knows?

Palms and Opium follow next, this is where the listener is given a soothing break from the utter destruction from the previous tracks, as the lyrics bounce in, listener’s are made to feel like you are on opium, sat underneath a palm tree in the sun. It’s pretty safe to say that they were probably doing this when the song idea came about. Slide guitar with gentle bass playing and very low vocals mixed with odd harmonies here, perplexing stuff.

The albums doom monster arrives next, named Long Gone, the same Weedeater structure is incorporated here with especially raspy vocals. I saw Weedeater back in 2010 when they hit Liverpool and tore the place to pieces. Dixie Dave seemed to be drinking from a medicine bottle placed on-stage; I like to think it was just a bottle of iron filings, as this is how he sounds, all the time.

March of the Bi-Polar Bear is a drum solo placed on the album. There is nothing more to add, it’s good because it’s short and has a great name.

Homecoming is the next track which oddly for Weedeater uses a major key instead of their minor, doom-inspired, skull crushing normal sound. This track shows that Weedeater are clearly not a one trick pony. Vocals remain yet add a different feel with the different pattern and key. The guitar solo in this one is thicker than Sean Paul’s fan-base.

To close an album like this the band opted for a swamp-inspired banjo instrumental with swamp noises added for maximum effect. Backed with a bass and the sound of toads croaking, this is it folks. It has ended...or has it?

Around two minutes later piano appears! It sounded a bit like the intro to Bottom, the popular 90’s comedy show. After this, it genuinely is over and time to press play once again as unlike Bottom, this album will never sound dated.