Caravan of Whores The Road to Kurti 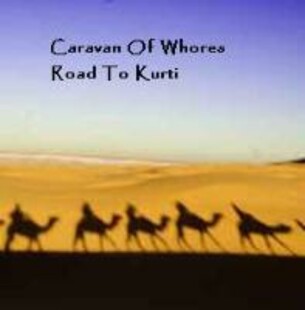 Caravan of Whores appear to have proceeded to Kurti in their latest release, the band have been busy getting lost in the depths of the Welsh valleys to record their seminal stomper, The Road to Kurti.

Recorded at Foel Studios and engineered by the finest engineer and Agent of the Morai axe-wielder, Chris Fielding, this newest offering saunters in with lumbering bass-lines and strong vocals, titled Drug Queen this track brings in the Caravan’s use of progressive patterns and drawn-out guitar notes with added modulation effects in the final throws.

Mr Bendy Man is the next track to stamp into the ears of the unsuspecting listener, spiralling riffs turn into cascading progressions. The main riff plods on with less dirt than could be desired. The middle of Mr Bendy Man is where C.O.W. start to swing with slightly over-complex drum beats. The closing riffs of the song have repetition that is quite comfortable for a black-lit room environment.

Tones on this record seem to have been overlooked slightly as there is only so much Fielding and Foel can do in terms of overall sound, having produced gold with such doom-inaries as Taint and Electric Wizard, it seems that the proof is in the sludge-pudding. Adding more grit to the overall sound of the greatest caravan of this decade could bring this brand of doom to a wider audience.

Your God Is Dead is the next doom seminar the lyrics however, seem quite forced especially within a field such as God. The riff is quite a belter, smashing through with somewhat stereo-typical progressions, there’s not much here that you won’t be expecting. The build-up to the mellow, Dead Meadow-style breakdown is where this track comes into its own. Reverb with fuzzed-out solos, Electric Wizard-style bass-lines and excellent drumming keeping the whole thing rolling along nicely.

Waiting is the closing track and it would seem C.O.W are back in their comfort zone with odd-ball patterned vocal and guitar lines with the same, tried and tested progressions that they have exuded time and time before. I suppose this is their niche that only they and Cathedral have explored in later years.

The song slows down and begins to build into a simple, yet catchy riff that leads into a bit of a void, I can’t help but wish they’d bashed that first part of the slow riff for hours but alas, they changed again and the vocals pepper the next bars leaving the listener slightly lost in the track, no bad thing but it could have been one of the coolest closing riffs on an EP this year.

I leave this review by saying that Caravan of Whores is one fine band but I’d recommend that they up their amplifier size and increase their intake of whatever substances when putting material together. The new stuff is the best they have been, tighter musicianship, stronger vocal performance but their downfall is overall dirt and lyrical content.

Whatever road you decide to take this year, you should consider the Road to Kurti...

Forums - Reviews and Articles - Caravan of Whores - The Road to Kurti