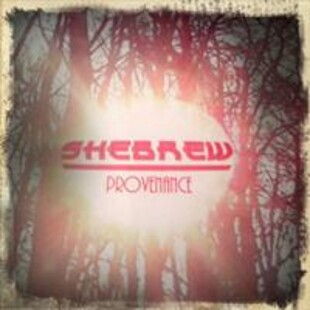 Shebrew; three piece stoner rock outfit from Birmingham; birthplace of heavy metal, you know that industrial place where teenagers get really fucking high, lose their fingertips and downtune their guitars. The Provenance EP is self released by the band as far as I can tell and is limited to just 100 CD copies, a quick search online tells me that Shebrew cite some great bands as influential to their output; Pentagram, The Obsessed, Kyuss and local brummies Black Sabbath.

Sounds like a winning combination for sure and for the first minute or so of opener Urethane it's warming up nicely to be some of that uplifting stoner rock-out music that those boys from Truckfighters do so well. The guitar positively bounces along like a distorted Mario side-scrolling over mystery boxes and shells. It was shaping up so well.. but then a pleasant wee mid paced speed run turns into something entirely different when Luigi appears and starts singing over the music in a 'head voice' style which is not quite falsetto, almost but not quite. At first it's just superficial and you continue on your run into the underground section just as the track kicks into the bridge, the pace drops, Luigi's backseat karaoke session begins to grate, your momentum ceases and in a rage you mistime a jump straight into the salivating jaws of a waiting piranha plant.

Luckily track two kicks in just as you were about to concede and you begin building up speed again to a suitably meaty riff marking the start of I, Reptilian, it's not long before Luigi appears; this time flying at the top of the screen. His half hearted crowing begins again and you perservere, ignoring the warbling and focussing on the underlying rhythm section which is doing an ok job of compensating. Then just as your jumps are beginning to click into gear a repetition of the words 'I do believe' throws you completely off guard and into a chasm you drop, falling to the horizontal event horizon of two-dimensional oblivion.

Now into the third track Mercian so tense is your grip on the SNES controller that some of the carbon inherent in the plastic has been converted to diamond. Luigi has disappeared off into the sky as you are lulled into a false sense of security, a minute in and a shadow appears on the screen and this time it's not Luigi who drops into the game screen but the singer from british melodic nu-metal act InMe who immediately carries on in the style of that weird green-dungarees sporting brother of yours. By this point your sub-conscious has taken over your motor skills and surprisingly you find your way back on track, even picking up a well-hidden +1 along the way which had eluded you in the previous efforts. It's ony when Babylon is in full flow that you notice Luigi has joined that bloke from InMe on screen and they are now attempting some barber-shop style vocal harmonies over some not-too shabby phaseriffic guitar work, suddenly your sub-conscious shuts down as ooh oohs blast your auditory receptors leaving you to bash AB frantically in a manic panic leaving Mario hopeless to the surrounding Goomba population.

Unable to resurrect your sub-conscious you are trapped in a kind of slow-motion continue screen limbo whilst closing track Year of Blood emanates from the TV speakers, this time though you're prepared for the vocals and the rolling melodies of the song begin to make more sense. With no part of your deeper mental capacity left to resist you begin to accept that a band of three big dudes with sterling musical ability and taste have scuppered themselves a bit with a weak vocal style which is better suited for J-pop than S-rock. Ozzy, Wino, Bobby Liebling, John Garcia; all these dudes sing from somewhere deep within, complimenting powerful music with powerful singing.

Shebrew have done a good job with this EP and music-wise it has some nice moments but I just hope next time it's Mario doing the singing and not his daft falsetto brother Luigi!