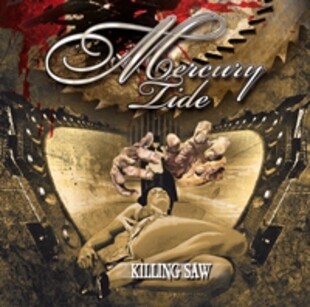 It's not often we get power metal here at ninehertz, but here goes nothing.

Mercury Tide are a German power metal band which features the Angel Dust frontman Dirk Thurisch. I am not aware of this particular chanteur's work but evidently that band has had two long stints of existence, the first one in the 80s and most recently from 1998 onwards.

Dirk has now 'closed the door' on Angel Dust and Mercury Tide is his new baby. It originally started off as a side project, but has now become his full-time concern. What is contained is a clean sounding, melodic bunch of songs that bring to mind the likes of Timo Kotipleto or *gulp* Dragonforce.

That operatic range that was first made popular by Iron Maiden and then symphonised by endless European combos is on display here, but it has a character all of its own.

Even the dodgy sentence structures in the lyrics (People are still dying in the pit of death?) don't really matter. The production is ridiculously clear, every instrument can be heard in perfect clarity. The guitars peal with a crunch you only really hear in guitar shops, the keys cut through everything incredibly clear and the main man Dirk's vocals ring out over everything with a powerful, strident manner. This is no bad thing, loads of bands could probably learn a little from Mercury Tide. The only problem is with the originality, although the music is fairly engaging and impressive, you get the feeling you've heard this same structure elsewhere before.

The band's gothic shtick (they are dressed in Victorian garb in the promo shots provided) is cool, but isn't translated in the music. The lyrics are throwaway and a tad cliched, but if you fancy something overblown and pompous to rock out to, go nuts, this could be your album of the year.