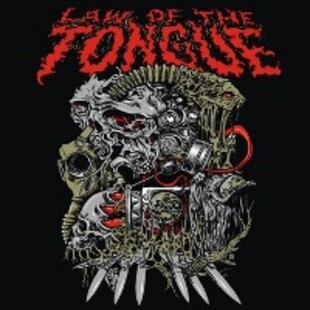 Law of the Tongue are a 4 piece Stoner/doom band from Australia and was started by members of the sludge outfit Pod People after they disbanded.

Not too dissimilar to Pod People in that Law of the Tongue produce weighty stoner doom with catchy as fuck riffs with enough groove to tap several feet to, the vocals are reminiscent of the UK’s very own Gurt or NOLA’s Eyehategod and musically this could have easily come out of the southern sweaty swamps, the bass sits in the mix beautifully and when a nice fill is produced like at the end of Used and Broken.

It‘s like the song has been hijacked by Scott Reeder, these songs would easily have worked with normal singy vocals too but the harsh almost death metal vocals on some tracks sit in the mix well and are not to over produced, so this disc will still appeal to fans of Electric Wizard and Iron Monkey alike.

The drums sound very organic and the tempo changes are enough to give you stoner whiplash, the guitars are warm and heavy and sound brutal as hell when things get going, would love to check these guys out live.

Stand out tracks are the aforementioned Used and Broken with it’s almost Electric Wizard riffs and Decapod that has the tried and tested ‘Sabbathian’ plod going on but in all honesty every track has something good to offer and only gets better with continuous listens.

Each song is extremely well crafted and has enough riff twists and good vocal delivery so that the listener does not get bored and all songs (most clock in at over the 5 minute mark) seem a lot shorter than they actually are.

Go by their bandcamp page to get the album for free while you still can.