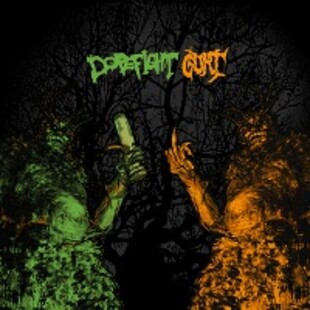 Here is some sludgey, screamy split action from two of the grimiest (in the dirtiest sense) bands you'll hear this year.

Gurt are as you'd expect, from Louisiana, where all the best sludge is made (literally). Their side of this split release is just like cleaning the grease out of a particularly old and smelly kebab shop sump tray. The vocals are a definate highlight, high-pitched but decipherable, they roll with clear diction but a layer of scraping, horrid, throat-scratching din attached, very nice. The songs themselves take that blues-via-homicide route, you know what I mean, lots of distortion and a whole load of riffola to keep you interested. at points they gallop off in speeds lesss suited to sludge in the way that Eyehategod do, but this is awesome, more speed in sludge! (If you'll pardon the pun).

Dopefight are an altogether more murky affair, their first track 'Stonk is slowly pulled from the depths with a reluctant drag that can only come from a band who have taken it upon themselves to include the word 'dope' in their name. Like pus seeping from an infected blister on the face, this is difficult to think about, but is rewarding once it's over with. The band do inject some speed about halfway in, but if I were present at the studio I'd be prodding them for signs of life at points. Once they do get going, it's a chuggy but fun take on the sludgey stoner rock template they perfected on their last LP 'Buds'. The vocals sound like they were recorded as an inconvienience to the singer before he went to shoot pool in a dive bar where they serve gassy, sweet beer while biker types shoot pool and each other.

Second track 'Green Solace' is a shorter affair, and packs a bit more attitude, the band slogging through riffs like stubby cans of lagerbeer.

This is a split to annoy your neighbours, spouse, significant other, parents, pets, local councillors and the met. But only if you have the cojones to play it LOUD.