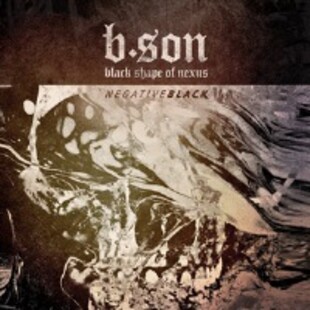 Black Shape of Nexus are a German bunch of misanthropes and this is their morose and terrifying new album.

Negative Black starts with a horrid maelstrom of feedback, like a wave of insects swarming round your head, not irritating, just like a quite unpleasant wave of hiss and scratches.

This of course gives way to the pure bludgeon of the riff, the sound that BSON are famous for. It's almost like a workman-like beat they clatter along with, focused and direct, they seem to be attempting to replicate George Orwell's quote from 1984: 'If you want a picture of the future, imagine a boot stamping on a human face - forever.

The guitar sound is buzzing and opressive and they reach the titanic heights of scene masters Amen Ra at times, that hypnotic yet cathartic rumble that grabs you and pulls you in. The vocals are sometimes passed, brutal wrestling tag-team style from one voice to another, but both sound tortured and grim, there's just no escape.

There's some fantastic samples on here, Americans discussing war and hate while the band pummel on machine-like behind it all. The near-20 minute '10,000 uF' rumbles on and is at least a lesson in dynamics compared to the other tracks, but overall this album still makes me feel a bit uncomfortable. It's that feeling you get when you know you can't stop in time and you may well hit that wall, the same feeling when the bile rises in your throat for no apparent reason and the effect that too much sun and not enough water might have on the mind.

This is great in short, no amount of description can prepare you for the sheer sonics at work here. The loudest band I've ever seen is a Belgian troupe called Blutch, they nigh-on ripped my ears off. If I ever see BSON live, I expect they will try and do the same. This is what Today Is The Day would sound like if they slowed things down and lived in Germany with some better equipment. Investigate if you're into sonic torture, if you prefer getting drunk to Sabbath-a-like bands, stay away, this is far too real. As the great Mark Corrigan once said (I think) 'Frosties are just cornflakes for people who can't deal with reality' well BSON are for people who have had a bit too much reality in their lives, stay away.