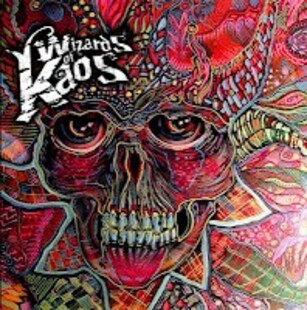 Korn. Katatonia. Kool and the Gang. Kriss Kross. Ulimate Kaos... Sting. Nickelback. Jason Derulo. I've forgotten the point I was trying to make some time ago. Right, deliberately spelt band names and them not being good as a general rule. Then I ran out of 'K' bands and got confused. Kula Shaker. Anyway, the name doesn't inspire a lot of confidence does it? Fortunately, the band are fronted by ex-sHeavy man Dan Moore and bring with that they are granted a certain amount of credibility.

Wizards of Kaos are pretty much straight ahead stoner band, but with a measure of classic rock added in the form of some Thin Lizzy style harmonised guitar work among the palm muted riffs. The band is in fact all about the riffs, sometimes to their detriment. On the occasions where they step back and let the bass lead or give the chugging a rest and try something different they really shine, although in fairness the songwriting is solid throughout and the band come across as a well practised unit.

Let's look at the bad. There's a lot of vowel mangling going on in the vein of Garcia and Hetfield, a few sections where they're trying to do the whole cheesy galloping rhythm thing and a slight over-reliance on wah guitar and solos. In fairness, these are problems I have with a lot of classic stoner bands and WoK are a lot more listenable than most. The production is also a little weedy; everything is clearly defined but everything sounds a little thin. Maybe it's part of the whole retro vibe but all it really gives is a lack of oomph.

With 13 tracks at 56 minutes and doing little to step outside the boundaries of retro stoner, 'WoK' is perhaps a little overlong and could do with jettisoning a couple of tracks. Mike already pointed out the problems of bands working in the instrinsically restricted genre in his 'Steak' review, and it's a problem I'm hitting in reviewing them, meaning I'm probably selling them short. To cut it short, if you're after a pure stoner album to blast through your car speakers this summer, you'd be advised to check this out.