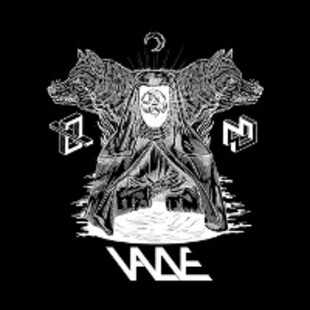 Hailing from Paris, this 5 piece present something of a quandary to these old lug holes of mine.

It soon becomes clear that we’re in the territory of clean sounding modern doom (that’s doom not Doom) with post-rock influences. This is likely to go one of two ways; enlightening journey or tiresome snorefest. Allons-y!

Opener Humanae Libertas creeps in with a foreboding drum intro (reminiscent of Cathedral’s Mourning of a New Day) giving way to slow (but not sslllloooowwww) guitars with a relatively clean compressed sound.

Picked out guitar signatures combine with tense chords, adding layers of detail to proceedings. Hmmm, OK but I hope there‘s more to it than just this. The singer is yet another graduate from the Institute of the Raw Larynx, producing the tortured agonised vocal style (we’re talking screech rather than growl). On the rare occasions where he actually sings on this EP it suits the overall sound much better, particularly in the slower sections.

Valve turn conventional wisdom on its head by having the weakest song on the EP as their opener. Not a bad song necessarily but a frustrating one as it outstays its welcome towards the end of its just-shy-of-9 minutes duration. The initial impression was pretty good but it soon felt like we’re going nowhere. Slowly. I spent at least half of the time waiting for it to grab me or surprise me somehow, only to be left feeling unsatisfied and disappointed. A bit like drinking alcohol-free beer. Zut alors.

It’s a common problem with this kind of music; it soon sounds familiar and is just crying out for a big pay-off that, dishearteningly, rarely comes.

The mid paced chug which signals the start of track two O’Alquemista does a much better job of holding the attention with a more dynamic and memorable structure. Am I the only one who thinks slow bands sound best when they occasionally speed up? And when fast bands slow down for that matter? Anyway, well done mes amis, let’s see what you can offer from here on.

Next up Into the Shadow of the Black Sun (Could you get a shadow from a Black Sun? Wouldn’t it need a conventional bright sun or other light source behind it to aid in the shadow casting stakes?) eases its way along in a manner that’s easily recognisable to anyone familiar with Isis or Cult Of Luna. It picks up into some decent heavy riff work only to be let down by a few unnecessary pinched harmonics thrown in for bad measure. They’re a pet hate of mine and turn an undecided basstard against an otherwise adequate if unremarkable song. More worryingly, it is ultimately let down again by escalating its way towards a pinnacle that never comes.

By song 4, Siren, the dynamics are picking up again with a well varied pace and better flow between the intricate and heavy sections. This song actually feels like its going somewhere and the end feels like an end, rather than just fizzling out. This instantly succeeds in making it a more interesting ride and results in a happier pair or reviewers’ ears. Bon.

OK Valve, it’s 2-2 in the disappointment versus gratification stakes. This could go either way. Are the Parisian hopefuls going to induce wows or yawns at the last attempt? Come on garcons, that last tune got me back on your side, don’t let me down now……

Saving the best until last, I’m pleased to discover that final track Great Architects is their trump card; the moment where all the good bits get better and the potential is realised. A relaxed build up soon leads into some interesting , discordant, tension-building moments. A neat segue carries me happily along into a stop/start section that suddenly accelerates into the desired payoff with a pacey and heavy groove. This is like a long awaited shot in the arm and builds into a double bass powered crescendo before returning to the more familiar slower churning of yore, neatly wrapping up proceedings with a real sense of purpose. This tune significantly raises the bar and shows that Valve are a band with plenty of good ideas which, when they come together, make for a very enjoyable listen.

Like the previously listed bands who Valve are taking cues from, I get the feeling that this Gallic quintet will develop their sound and progress with subsequent releases. If they can avoid the trap of jettisoning dynamics and adrenalin rush in favour of endless noodles and repetition (got to say that was Isis’ downfall for me) they could blossom into something really interesting.

This half- hour of French fancies is available as a download or a very limited (30 copies!) digipack CD graced by some rather fetching monochrome pseudo-mystical/magical artwork. If Valve can realise the potential which they clearly possess, they could have a very promising future ahead of them.