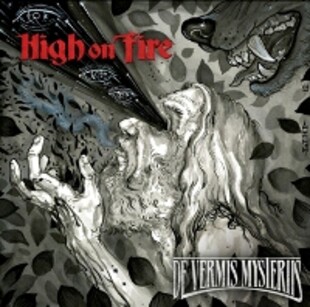 As 2011 drew to a close and word got out that High on Fire were working on their sixth studio album, many fans assumed Jack Endino would have been in the producers seat for their latest offering, De Vermis Mysteriis, however it turned out to be Kurt Ballou from Converge in the producers chair.

With the first seconds of the opening track the listener is instantly transported into the world of High On Fire and the brain of Matt Pike. The opening thunder of Des Kensel hammering his was around his kit acts as a kind of surreal gateway for Jeff Matz and Pike to explode through. The track is titled Serums Of Liao and when the lyrics are dissected, the writing is not dissimilar to 2010's Snakes For The Divine with Pike roaring on about twisted David Icke theories and conspiracies about bloodlines and backwards religion. This coupled with thrashing riffs and monstrous bass-lines welcome the listener into the dark and heavy world that is High On Fire 2012.

Bloody Knuckles is the next track to batter the listeners eardrums with, lyrically, they mean just what your eardrums are thinking. This track proves that the album shows texture, meaning that there will be variation in the styles used. De Vermis Mysteriis is named after Robert Bloch's Grimoire and subsequently incorporated into HP lovecraft's Lore of the Cthulu Mythos. Imagery of these works is clearly an inspiration to Pike and Co.

As many fans of Pike and his infamous previous band Sleep will be expecting a track to roll a joint akin to E.T's finger to, the next track, Fertile Green shuns the stereotypical 'stoner' tag and thrashes its was through in a unique way allowing Pike to slam his trademark style of shredding to the mix, hammering on at light-speed yet controlling all of the songs tempo and gargantuan riffs. With a backing like Kensel and Matz, its like with Pike alone, the band could reach a similar, legendary status as Sleep themselves.

Madness of an Architect begins with a feed-back blended, fuzz drenched riff that could only be the roar of Matz' Sunn bass amp, the track then takes a massive U-turn in terms of what the listener thinks will come, a stomping alternate riff that has Sabbath influences pouring out of it. The rolling drums sound mountainous against the Lemmy-esque growl of Pikes vocals.

One thing that should be mentioned about this album is that despite all of balls that this album exudes, the production quality is nothing compared to the clarity and sheer volume that Jack Endino provided the band with on their previous release. Kurt Ballou seems to have overlooked the quality in each individual member of the band. As good as it may be to achieve that 'wall of noise' that many bands strive for, when dealing with a trio as powerful and excellent as High On Fire, it seems that Endino hit the nail on the head in hindsight, not to say that the production is shite, but if you are going analogue, do it entirely analogue, don't add a fuzz effect and hope for the best.

Pot heads will rejoice at the next track, it begins with a mellow bass riff that forms the interludes backbone and works perfectly with the double-tracked guitars and improvisation that follows, no vocals just perfect music to sit back and ponder life itself. In this case, the calm before the unbelievably heavy storm...

Spiritual Rites explodes from the speakers like a sonic bomb, thrash guitars and drum-skin annihilation ensue as the band rocket through the track into a Pike solo that is hit with all the trademark, fretboard gymnastics we all know and love. The track brings in screaming noises guaranteed to catch you off guard the first time you hear it. Wonderful stuff.

King of Days takes the listener back to Death Is This Communion's banger, DII. Swinging in big with a monster of a riff and a bass-line to match, Pike has changed the pace and opted for a melody, rarely heard in any of the bands back catalogue, Pike has opted for use of 'ooohs' which many fans reading this will either be put off or intrigued, believe me, it works.

Lyrically the track begins with 'A psychopath...' you don't need an excuse to like this one, it ends with what can only be described as a regal, double tracked solo then to Kensel beating his snare and bass drum with serious vigour.

The albums title-track roars in with backwards cymbal to an off beat song that rocks harder than anything from this year. The songs lyrics are somewhat dis-jointed as Pike bellows 'Wizards, Hyperborea, craft of Khem' over a riff heavy enough to make statues cry blood. Pike thunders back into his usual self in the guitar solo and ties the song up at the end.

Feedback comes back in as an intro for Romulus and Remus, this track features as riff to make the listener feel like he has got himself album of the year so far with paced drums and a marching bass-line, the band have evidently not strayed too far from their roots.

Finalising an album such as this is difficult but High on Fire managed to pull it off by blending more feedback and drifting into a track which, in verses shows Pikes Lemmy-esque voice in full whilst being backed by Matz' deep groove. The track then blasts into a grinding riff that is true to the bands early work. Verses slip back into previous patterns and the overall song begins to reveal itself.

As the final 9-string guitar solo fades in, the listener is put into the saddening fact that the album is almost over, perhaps time to put the kettle back on and roll another to go back to the other world that High on Fire created and then snatched away as the final riff ends.

The version I reviewed here had 4 bonus tracks included on the end, Eyes and Teeth, Blood of Zion, Cometh Down Hessian and Speak In Tongues, all live bar the last. Having had the pleasure of watching High On Fire, bizarrely supporting Fear Factory, I can honestly say that live, the band are bad-ass, live and on record is not quite the case, perhaps live albums are best left in the 70's.

I reckon I could have done without hearing the technical difficulties the band suffer trying to get their sound right live, maybe its just me.

Speak in Tongues is a track that could have been added to the final mix of the album but didn't get there. It wouldn't seem out of place mixed in with the other tracks.

To wrap up, the album is well worth a listen and has many great moments and is a welcome addition to any collection. The only downside is the production, this will hopefully grow on me and others in time to come.