Nitkowski Stay In The Home You Love 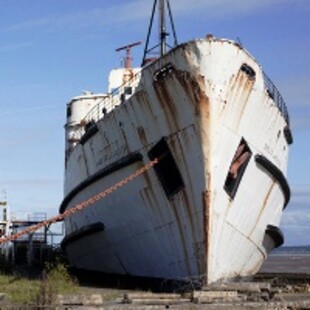 I've been a fan of Nitkowski for a while now, sharp, angular and unpredictable, this is a long-awaited one for me.

Again, it's like someone has put an electrode up Shellac's collective chutes and flipped the switch, Stay In The Home You Love manages to eschew the memory of its predecessor the excellent Chauffeurs with even more invention than was packed on there before.

Mainly clean, but full of rattling and juddering twists and turns, Nitkowski's music never stays still, it has moments of calm, sure, but for the most part its a wriggling jellyfish of sound, twisting down mathy routes one moment, floating in its own misery the next.

There's points on here where the vocals sound like a wounded animal screeching for some mercy, but the lone voice talking in deep serial-killer like calm works better, bringing to mind the excellent, but often-forgotten Charlottefield. The interplay between the trio often sounds like a more meaty Don Cab, but there's much more to this than riff gymnastics and technical prowess. You won't find this band doing instructional videos on YouTube, patiently going through the motions, rather some of it sounds improvised, which is some achievement when you consider it's planned.

Highly technical, they relate to the listener something that many simply do not, the ability to reign it in to create something listenable. Too often bands of a technical gait wander so far into their own back passages, they pop out the other side, still smug and wearing the self-satisfied grin of righteousness that many people find very punchable.

Lyrics apparently deal with identity and its loss, but feels cathartic and wonderful at the same, like a joyous release after a period of stress. Nitkowski are almost always playing live somewhere, so check them out, you'll be slack-jawed I can see it now.

Forums - Reviews and Articles - Nitkowski - Stay In The Home You Love