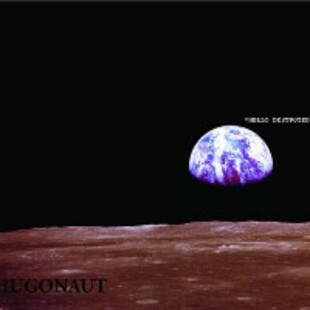 In a nutshell; 90s post-grunge inspired rock/ metal. This reminds me of Alice in Chains and all those bands that became inexplicably huge in their wake.

Nova Scotians Hugonaut (Huguenot? Are they making a comment about their French protestant heritage?) introduce themselves to the world beyond their backyard with this 7 track album which contains plenty of ideas, none of them particularly ground breaking but likely to strike a chord with anyone missing the rockier end of post-Nirvana grunge.

I could never handle AIC, Pearl Jam and the more histrionic side of Soundgarden so this is not really doing much for me. There are some nice riffs, pleasantly dirty guitar tones and liberal use of wah but the songs are mostly vocal led which soon becomes overpowering and detracts from the music backing up the voice.

Twenty odd years ago, this album would probably see Hugonaut plastered across the pages of Kerrang and touring the world to adoring fans but I can‘t see the same reaction in this day and age. If these guys are playing for pleasure and love that era and style, they can be proud of this album; if they see music as a career choice, they may need a back up plan.