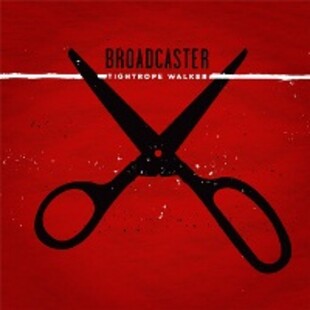 Three tracks. In three tracks I fell into a reverie of checked trainers, chrome studded belts, primary coloured hair. Teenage punks. When I say reverie it was more like a minor case of sleep paralysis.

Lyrics that left my head as soon as they had been spoken. It made me think of that dalliance with popular punk music that myself and so many others go through. In youth, I thought it was important, and in time I looked back and wondered how so many of those bands could convey anything at all. Broadcaster provide a microcosm of that feeling, good enough to tap your feet to as the songs play, but utterly meaningless by the time you get to the silence at the end.

Broadcaster provide a competent punk outline here, but the metronomic drums and the juddering guitars blend from the lead track, the proverbial Tightrope Walker, into Anything You Never Heard and The Only Way You Know to the point that bar a second of silence between each one I struggled to tell where each ended and the next began. This is probably the greatest curse you could wish upon any band, and unfortunately Broadcaster have got it bad: they are stunningly mediocre. Not outright bad, but nothing amazing either.

With enough Ritalin I can just about focus on the lyrics long enough to cast a critical eye upon them. Nothing you haven't heard before, something something about someone who's a bit of a backstabbing silver-tongue? Something something doesn't it suck to work in a monotonous job?

The irony is heavy in the opening lyrics of the final track, "Like the same song / in the same key / where you don't feel anything." They could very well be singing about themselves. If work, if life, is monotonous then music and art need to be a vibrant counter to such repetition. Or, if monotony is the aim in a band's music they need to do it with a sly wink or something approaching intelligence. I wish I could get annoyed, angry even, at this release, but it is so utterly competent, produced in that clean and professional manner, and performed with such absence of personality that I have waxed lyrical on some wandering philosophy of music when the reductionist in my head is handing me the purest of all reviews available when faced with music such as this. The reductionist in me would like you to know that this 7", with its boringly competent artwork, its American homogeonised globalised perfectly santised punk pop anaesthetised songwork, can be summed up with but a single word: Meh.