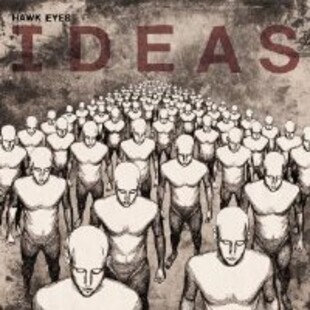 Currently residing in California, mainlining cocktails and sleeping it all off on giant yachts, Hawk Eyes used to be called Chickenhawk and would play for some vegan slop and a floor to roll around on all night.

Now they've changed their name, they're too good for us, swaggering through the UK when they come back, ignoring the little people who helped them on the road to their chosen career.

Jokes aside, Chickenhawk were, and Hawk Eyes are, one of the best bands you can hope to come across, both on record and live. As Chickenhawk they were dumbfouding, and Hawk Eyes is a continuation of their cherry-bomb-like explosion.

The production is the stand-out difference and Stick's vocals have become more sung than screeched, but they still have the madcap and jaw-dropping thing they have always had. Think the less-annoying aspects of Mr Bungle, via fellow Leeds mathmeticians Bilge Pump and Faith No More and you'll have a vague clue.

Guitarist Rob has gone even further into 'petulant toddler plays with his pedals' mode and it sounds great for it, demented and piercing on tracks like 'Yes Have Some' it's just hyper-fun and enthusiastic to the point of infection.

A nod to one of their former band's songs comes in the form of the lyric 'Is this where I want to be?/Burning up in kerosene' which was of course their radio hit.

The lyrics seem a bit less raging, but that's all good, they still sound original and still ring out over the riffola on display. A constant change of pace makes things interesting.

The two-minute 'Milk Hog' is a highly original squatted-out classic too, with some nice glitchy noises invading, like a ZX Spectrum that won't die. Followed immediately by another 2-minute swish swish called 'Kiss This'.

It's all truly rollicking, and feels like a natural progression, catch them live for the full stage show.

Hawk Eyes are here, but look out, because we've heard they like doing things like wet willies, nipple twisters and other playground diversions, what a bunch of dicks.