Hellamor Secrets Buried In Your Mind 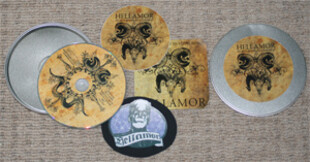 This is one of the best-packaged CDs we've ever been given at ninehertz, included in the lovingly-presented metal container are this bands' release 'Secrets Buried In Your Mind' as well as a book of lyrics, a sticker and a patch, brilliant.

So what of the music? Well these German chaps play quite an over-saturated genre as it is, but they are unique enough to get away with it. Atmospheric vocals combined with an almost Karma To Burn style of stoner rock means they rock hard.

A definite American influence pervades the whole release, as so often you find with bands like this in Europe, but its done with such passion, that doesn't matter. One day we'll get a German stoner rock band that sing in German and sound totally unique, I know there must be some out there! Hellamor are on the cusp of being this band but do sometimes fall into certain tropes, lyrics about love, desire and angst have been done a million times before.

Back to the vocals, those who enjoy a slab of Alice In Chains now and again will dig this, that gravelly charm is here in buckets. When you look at the bands they have played with, their sound becomes all the more obvious, Nebula, Atomic Bitchwax and The Heads included. You know the drill, put it on, forget you have a brain and sink a brewski.

Forums - Reviews and Articles - Hellamor - Secrets Buried In Your Mind