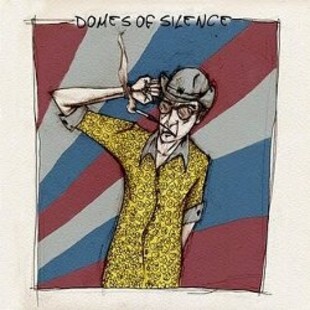 There’s one word always hits me every time I listen to the ‘Domes, whether that be live in a sweatbox pub or moping around in the drizzle with my headphones, “textbook”. Their enviable habit of hitting the stoner-rock cactus thorn on the head reigns supreme again here on this CD/download single which serves as a tasty titbit to hook in gaping-mouthed, head-nodding listeners for their soon-to-be-released debut album.

Domes’ direct, yet oh-so warm and cuddly, take on fuzz-ed up hard rock continues to act as a vehicle on the title track for Sean Parkin’s gruff, authoritarian musings on the quirky late journalist and author, Hunter S Thompson. Backed by a meaty bout of solid riffage, with a tone at times reminiscent of Kyuss’ “Hurricane”, Sean’s high position in the mix gives excellent weight to the rock n’ roll story element of this groover; a must-hear for fans of Truckfighters and Dozer. “EJM” continues the dictionary definition desert worship with its slowly building drum-heavy intro opening up into a riff a little more reminiscent of bands from the heavy grunge era, like Primal Scream and The Jesus and Mary Chain. Guitarists Carl Bickley and Richard Aitken quickly lock into a chug tighter than vacuum-packed plastic with Charles Lane on bass and remain as one unit throughout, with Sean’s slower, more calculated throaty tones supervising a darker lyrical theme. “Nightbus” is a chirpier number, lyrically about, well, errrr… shitty dickheads on buses! Judging by the giggling backing vocals towards the conclusion of the last track, I’d say this is definitely a band who’ve found their sound well and are just as happy rocking away to themes as diverse as ‘Gonzo journalism’ and pissed-up nob-jockeys!

Overall, this is a very solid effort from one of the purest-sounding bands on the circuit, and even comes complete with the colourful and retro pencil-strokes of acclaimed scene artist Michael Cowell. It’s already a hot summer, so light the BBQ, chill the beers and stick this through your garden-speakers while you wait for the full album!