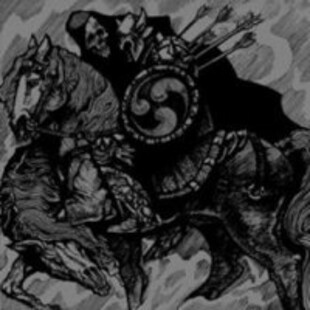 First off - what a fucking brilliant name. Why no band has been called Conan before, apart from some piss-poor South American rock band of the eighties, is a bit of a mystery. It is the ultimate metal name, and let me tell you this my fetid disciples of filth – it is certainly not wasted upon this fine Mersey-based power trio.

Secondly, this is the biggest and warmest guitar sound and heaviest production I have heard since ‘Dopesmoker’ by Sleep. No shit. You may disagree. Order a copy and find out. We are talking drop F tuned guitars that hang heavy in the air like huge damp octopi and thud into the floorboards in a sickening wave of oscillating brutality. Thank Foel Studios in Wales for this cyclopean wallop in the head, and particularly to the spot-on engineering suss of Chris Fielding (ex-Agent Of The Morai). What a star this guy is.

First track ‘Krull’ opens up like a bloody huge blanket of noise that floods your house with sheer oppressive bottom-end malevolence. Very very fucking thick, like deathly treacle, but also extremely graceful and grand. This is sloth-slow post-sludge that rotates on an axis of almost minimalist dynamics. As the echo soaked and distant sounding vocals kick in you pick up a strong comparison with the haunting sound of the Slomatics; obviously an influence, but not to the point of hollow plagiarism. A minute from the end of the track the tempo picks up and Jon Davis bellows like a frosted Viking in the mist over a maelstrom of twisting raging metal.

‘Satsumo’ continues the gigantic sound – a slightly shorter and faster number that drives headlong upon granite-solid drumming and whirling riffs, whilst ‘Dying Giant’ is skyscraper in its conception. Turn the volume to maximum – the dense power of Conan’s statue-sized amps is awesome. After a brilliantly bombastic and ultra-ponderous intro, Conan switch to mode B again, a pile-driving mid-tempo charge that truly sounds like the sonic interpretation of an armoured giant swinging a cruel black mace, astride a megalithic warhorse tearing into a steaming and deep crimson morass of torn warriors. This is battle sludge 2010 AD – a roaring mutation of SunnO))) and early Melvins, but with something just a little different – borne out of the North West of England, not the North West of America.

Last belter ‘Sea Lord’ conjures up towering cliffs jutting into a dark sky, rising out of the white foam of a violent black surf. All four tracks are superb paeans to the cathartic power of super-low electric noise and viciously smacked drums – 34 minutes of amplifier worship (thanks for that one Boris) that represents Conan’s debut outing. What a debut; quite jaw dropping considering they haven’t been around long and have hardly played live yet. They’ve already been snapped up by Throne who are doing the vinyl release and Aurora Borealis who are releasing the CD, both hip switched-on labels who know quality when they hear it. Conan swing the axe and utter a grim oath to their bloodthirsty god Crom – and just like the ultimate barbarian himself, they’ll take yer fucking head off.