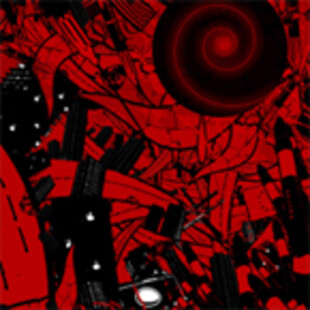 We've been waiting a long time for this one. If this album were a friend you were meeting at the pub, you'd greet it's eventual arrival with a sarcastic bout of watch pointing and an demand they get some drinks in. Still, it's here now, and if the delay alone wasn't enough to generate a buzz of interest, the 'Hawk boys' cheeky faces surely would. I only hope new drummer Matthew is as much of a cheeky scamp as the rest of the boys. Describing the band's sound is a little more difficult, veering as it does between as many musical reference points as there are minutes in their songs. It's a low end barrage of riffs and big bass and drums, touching base on everything from grunge, modern metal and Sabbath. Vocals have been described as having similarities to David Yow, which is fair given their range throughout the album, albeit a range at the more unhinged end of the scale.

An age after pre-ordering, it hit my doormat one day when I'd all but forgotten it and my initial excitement had almost waned. Thankfully, it's all you expect. And a bit more too. First off, 'Dude-a-Tron' opens the album with an unexpected (unless you already knew about it) blast of simple but effective disco tune, complete with handclaps, electronic drum rolls and throat shredding vocals. I'd love to put this on at the local 80s bar. Business as normal as of next track 'Piglosaur', rolling along in true Chickenhawk style on the back of some impressive drums and setting the tone for the rest of the album, plenty of low end guitar chug, slippery bass and with an Mastodon-esque harmonized guitar descent.

'Minus Infinity Killswitch' starts with some delicate acoustic guitar picking, giving of vibes of Kyuss' 'Space Cadet' before settling into a more classical vibe, undercut with some ambient reverb sounds before kicking back into more typical metal fare, with the boys crazier sides coming out in the breakdown, set out by some ludicrous tapping and blastbeats. More oddness with 'Duel-a-Tron', where the distorted guitar gives way to some country style picking. As throwaway as these sections are, they're a welcome break from the constant fist in the air rock.

The only thing people might not like about the album is when the riffs start flying and the band get going into full on metal mode, the similar tempo of some of the tracks give a lot of the album a very similar feel. Still, when it's a feel that makes me want to run all the way to work drop-kicking chumps in the face on the way, that's a good thing. A bit more experimentation next time and they'll have a boner fide classic. One two, fuck you indeed.