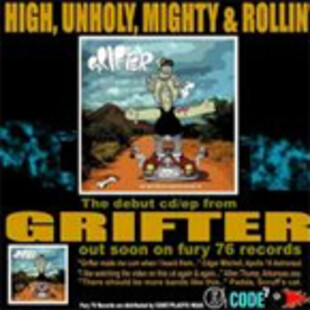 Grifter's reputation as a good time live band is growing evermore within the British Stoner/Groove Rock 'scene'. Whilst there is little on this '5 track and a video' cd to suggest any of this is unfounded, to rely purely on the feel good factor alone would be a dangerous game for any debut release to play. At some point songs that stand on their own two feet are required to fill the times when the listener isn't standing in their watering hole of choice shaking their ass and swigging shite beer.

It's fortunate then that Grifter deliver on this level as well. The two tracks that sandwich the cd 'High Unholy' itself and the charmingly titled 'Prick' may be acceptable to the pub boogie template but they are far outdone by the extremely tasty trio of meat that is 'Sweat Like Horses', 'Slow Boy' & 'Man Bites Dog'. With the 'show me yours & I'll show you mine' refrain it's a tough call to say if it's the silver tongued lyrics or the pure attitude of the delivery that make live favourite 'Sweat...' stand out. Either way it's a belter, enhanced all the more with an anthemic chorus and we aren't talking Coldplay here!

The same can be said of the more mid tempo and trippy 'Slow Boy', it did after all easily hold its own on the 'Sound of the Catacombs' compilation against the quality of Abdullah and DirtyRed. 'Man Bites Dog' meanwhile just grooves effortlessly, the cheeky rhythm being punctuated by some rather smart lead playing providing some real dare I say it... bite? Go on then I will.

As you'd expect 'The High Unholy...' is an improvement sonically over the still impressive 'Elephantine' demo, the vocals especially benefiting from a punchy and polished mix that doesn't lose the live in the studio feel. Add this to artwork that reflect the bands' live personality and a bonus video to match and the result is a complete and impressive EP which bodes well for the upcoming Catacomb Records release rather teasingly titled 'The Simplicity Of The Riff Is Key'. Oh you little devils!