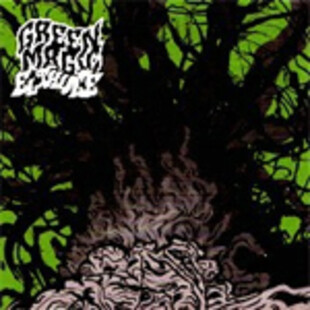 The visceral thrill that inevitably came with listening to El Thule's 'No Guts, No Glory' album was a real surprise a few years ago. The album followed along a fairly well trodden path - punk n roll infused stoner rock in a similar vein to Peter Pan Speedrock and countless others. However, El Thule stood out by accentuating their opposing extremes - their stoner rock was of pure desert origin, while their punk was less the gravel voiced Dukes of Nothing-esque grit, and more a sprightly Fat Wreck sound. Against the odds, it worked.

'Green Magic' marks their return and showcases their evolvement - founded presumably on gigging in their native Italy. The obvious difference is the beefier sound - the bass is louder and everything is heavier - a denser sound runs throughout dampening the punkier elements. It is a slightly sobering metamorphosis for those who found a guilty pleasure before, but it does make everything sound 'bigger' - the production handled by Mr Dango of Truckfighters of whom this occasionally brings to mind.

There are a lot of tracks that feel protracted - the album has only eight songs but lasts over an hour - and with the introduction of unusual instruments (particularly percussively, but also featuring a didgeridoo!) as well it's as if El Thule are aiming to prove they've grown up. Yet the songs are a little hit and miss. Only on two or three of tracks do they really hit home with any force - 'Adam Bomb' showing off their punk-injected stoner thrills to perfection and 'Bud Orange' proving a great head-nodder with its 'Blues for the Red Sun' genre-typical sound.

While it feels instinctively wrong to wish a band hadn't progressed, the instant thrills of 'No Guts, No Glory' aren't evident here. Yet a band should not rest on its laurels and parts of 'Green Magic' are all the better for the changes, the highglights mentioned above the strongest songs they now have in their set. It maybe that 'Green Magic' will be viewed with hindsight as a decent stop off before the evolution on to fruition with whatever is to follow. Promising.