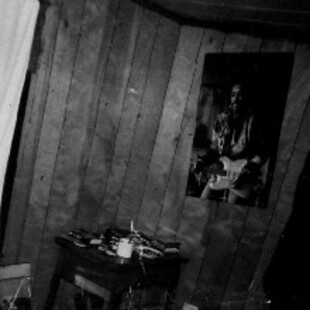 Harvey Milk, I've found from speaking to people, are an odd band in terms of who knows of them and who has never heard of them. I would PRESUME that most people who frequent ninehertz would have heard of HM, and at a push, I'd EXPECT a good amount to own a record or two by them. However, from recent discussions with various people I know, this seems far from the case. Whilst writing this very review I discovered that even Julian Cope, music know-it-all, had never listened to the 'Milk before reviewing this album himself. Perhaps it's their peculiar secrecy that distances them from the listening community. This isn't the conscious "look at us, but don't" kind of mentality you get with the Old Man Gloom's of this world, this is a "we're 40-ish, we make music, but we have real lives too. get over it..." kind of attitude. Mostly, however, it might be their startling knack for being the chameleons of the rock/stoner/sludge/doom music world. Listeners don't know what they're going to get.

This listen isn't the 'like a box of chocolates' projection that most bands want their listeners to think of them. Rather it's a violent sea of grenades, love, nuclear warheads, caramel and Molotov Cocktails, psychedelic grooves and lyrics that make you want to cry, be reflective, rejoice and tear your fucking heart out. One listen affirms that they're simply a rock band, another and they're the heaviest fucking doom since sliced Khanate. Then they just throw in a smattering of classic rock, sludge, stoner, glam, and a whole heap of other genres and ideas into the mix. The wonderful thing about Harvey Milk though is that it's seeming entirely unconscious. You just get the vibe that it's just long-time friends looking at music with fresh eyes and ears every time they go into the rehearsal room and the studio.

So, that's a pretty long introduction, and it could have been a damn sight longer. I could have mentioned that they have been split up for years before this record, that 'Courtesy And Good Will Towards Men' is thought by some to be one of the most experimental, heavy and influential records of the past 15 years; that they've been released on hugely respected labels including Troubleman Unlimited, Relapse Records and tUMULt, and that if anyone of you owns any early material by them on vinyl format that there's a good few people spread over the world that would most likely rip you arm right out of its shoulder socket just to have it. But wait, I just did say all of that. Darn.

But what about 'Special Wishes' then? Does it make up for years of no Harvey Milk output? Does it stand up to their past efforts? Where the hell could they go next?! Well the answer to the questions are: it's ace, yes, yes and absolutely everywhere (again!). 'Special Wishes' is a perfect example of a band coming back for their love of music and the fact that they need some medium of catharsis for what may have personally befallen them since their last record. From the opening throaty rasp of Creston's unmistakable voice on 'I've Gotta Love' to the bludgeoning riff of 'Crush Them All', the gorgeous yet heartbreaking 'The End' and 'Old Glory' and the epic closing track with its fantastic juxtaposition of Creston wailing "I wish to give you special wishes. On this happy day let's all say 'Hooray!' // I wish to give you special wishes on this happy day. Happy Mother's Day!!" and with their instruments carving sound waves into your face, you know that Harvey Milk are back, and that if they feel like it they'll continue making their eclectic, experimental and emotive music until their dying day.