Fu Manchu We Must Obey 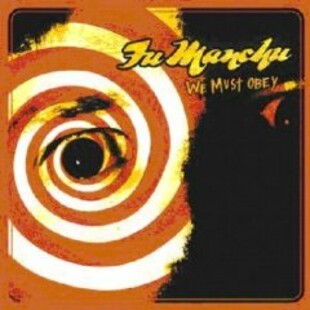 Now I must admit from the start that I'm a bit of a fan boy where Fu Manchu are concerned. Like what seems to be the case for many stoner rock fans of my generation, Fu Manchu are the band that kicked it all off for me. From the first time I heard 'Asphalt Risin'' I was hooked. Since then 'The Action Is Go' and 'King Of The Road' have become firm favourites in my collection and whilst their more recent full-length offerings 'California Crossing' and 'Start The Machine' had their moments I had my doubts that they would ever reach the heights of the late 90's again. However, when I heard the preceding four-track EP 'Hung Out To Dry' I began to have high hopes.

It has been well documented that Scott Hill and Bob Balch have pulled out the old fuzz pedals for this album and it really does make a difference. It's that warm fuzzy tone that drew me to the Fu in the first place and it's the lack of that tone in the more recent recordings that left me a little cold. But you can't have a whole album based on a 'nice' tone, can you? No you can't. You need some great tunes too, so that's what they've gone and done here. This album combines the fuzz and the riffs of the earlier albums with the more mature songwriting and melodies of more recent efforts and the results are awesome.

Fu Manchu certainly sound more angry than on their classic albums and that comes across particularly in the vocals with a more shouty style as also adopted on 'Start The Machine', drawing influences from their 80's punk/hardcore background. There is a real sense of urgency like they really needed to make this album.

As well as the faster, angrier tracks such as 'Between The Lines' and title track, 'We Must Obey', there is still plenty of groove here on tracks like 'Land Of Giants', 'Hung Out To Dry' and 'Shake It Loose', all of which stand up to any of the Fu's back catalogue and will no doubt feature in their ever spectacular live show.

In true Fu style, they've thrown a cover on here too - this time putting their own spin on The Cars' 'Moving In Stereo'. Now I must admit I don't know the original but what I love about Fu Manchu's covers is their ability to make these songs sound like their own and fit in with the feel of the album overall and they've managed to do it again here.

They seem to have saved the best until last with 'Sensei vs Sensei' and with a name like that it had to be great. Opening with a massive stoner bass line over the top of almost Hawaiian-style guitar, it kicks in with the biggest riff this side of 'Saturn III'.

It may not be Fu Manchu's best album ever, but it's almost certainly their best since 'The Action Is Go'. It's certainly the return to form I've been wishing for.