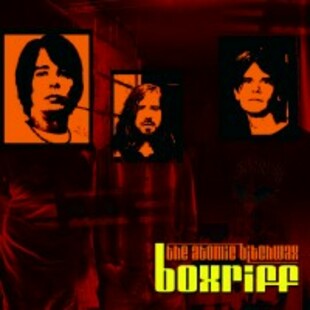 After a couple of albums and an EP which were good, but not great, plus band personnel problems, I wouldn't have bet on The Atomic Bitchwax making our top 10 albums of the year 2005 - which is exactly what they did with '3'. They seemed to be galvanised and they found another gear that gave them a set full of tunes that you wouldn't miss any of if you were to catch them live, plus a distinct identity, something you could argue they did not have before.

'Boxriff' is a stop-gap release between '3' and their next album ('4' perhaps?) and contains four newly recorded tracks, plus a DVD of a live performance in Washington. Priced reasonably, it goes without saying that if you are a fan of the band then this is for you.

The four tracks that make up the EP, produced by Jack Endino (the producer of choice for all early Sub Pop bands), are the main attraction for this release, and they do not disappoint. Naturally they continue the flow of '3', but never feel like weak tracks left abandoned from previous writing sessions. And of course, you can't complain about more of a good thing (Clutch's 'Slow Hole to China' album being a prime example). The songs are wonderful - simply great rock music.

It begins on a high - the oh-so-subtly named 'S.T.D.' kicking things off, then maintains the level through 'So Come On' and peaks with the gorgeous 'Turn Me On', a glorious song that stands as a testament to The Atomic Bitchwax 2006. The final 'new' track is actually a re-recoding of 'Kiss the Sun' originally from 'I', and while still being good, highlights the progress the Bitchwax have made, and ultimately feels a bit of a let down after what has preceded it.

The live recordings at the end of the disc and on the DVD group together the bands works (with a bias towards latter day material) as you'd expect, and, if you're a fan of live recorded music, then it's pretty good. Unfortunately, I've never really found live records much of a thrill - even with the best bands all they do is prompt me to reach for the 'proper' albums - so I can't say too much - there's a lot of good songs on here (ending in the brilliant 'Shitckicker') and it's a solid live performance. There isn't much going on in the visuals department, so the DVD is good for background music really, but with the live tracks added on to the end of the CD it feels slightly superfluous.

Despite this, this is still a great package - it's worth it for the four 'new' tracks alone, and there'll be plenty of you who don't have the live-music-negativity I have. One for the fans only? Yes - those uninitiated in the ways of The Atomic Bitchwax should check out '3' first - but for those in the know, you'll be needing to get this soon.