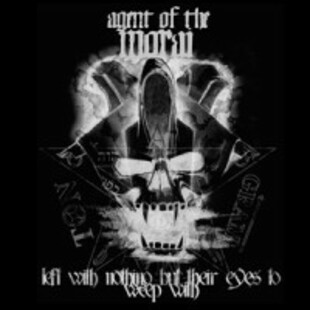 Leeds sludge-meisters Agent of the Morai scare my kitten. Now that's not all that surprising, their brand of slow-to-mid-paced sludge via doom is as heavy as the vinyl this release is pressed on (a rather nice red and black spattered record) and to be frank, its got a brooding, evil sound to it that would scare most music listeners let alone my feline friend.

Released very recently on Christmas Eve Records, whose previous vinyl release was a Red Stars Parade/Among The Missing 7', this record is full to the brim with worship of the riff, side one is taken up with the excellent 'Left With Nothing But Their Eyes To Weep With' which burns slowly before getting into a groove only Swifty and co can make. Their unorthodox lineup is a fact that lots of people mention, so I think I must at some point in this review, basically they have no bassist, relying instead on long-haired guitarist Chris to provide all the bottom end with just six strings. It works better than you'd imagine, downtuned, turned up and riff-heavy, you'd be forgiven for thinking they did have a bassist at times. The benefits of being a three piece obviously pay off on this tune as the vocals, drums and guitar sound in perfect doom-like harmony. The vocals are suitably tortured, the usual screaming in time, but the relentless nature of them becomes almost mantra-like and it seems a shame when this side ends.

Side two has two tracks, and begins with the choppy, march-like dirge that is 'Escape The Torment' that sounds like Iron Monkey in its regimented bottom-end heavy assault, made all the more Monkey-like by the vocals here, just evil sounding. Final track and myspace-featured tune 'Open Your Eyes' sounds even more evil on wax, the vocals and riffs are the slowest on this release, and keep pummelling into you until the track runs out in a squall of feedback and screams. Really good release for a band so new and the cover looks great, pentagrams, skulls and hooded figures, check this out if you want some proper kneeling-at-the-altar of the riff action in your life. Oh and I still don't know where the name is from.