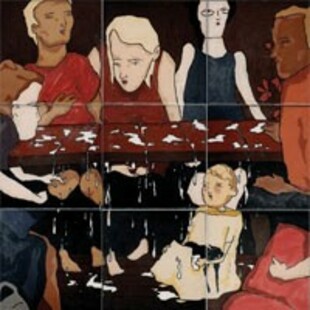 Alright you get the message already I hope. Mogwai's fifth album 'Mr Beast' is just that, a beast of a record. Recorded with Tony Doogan in the brilliantly named Castle Of Doom studio up in Glasgow this is one hell of a dramatic piece of music. From the moody opener of 'Auto Rock' which tinkers on the edge from start to finish and never fails to offer a new intriguing sound and yet maintain a level of melody throughout to the monstrously dark and consuming 'We're No Here' that takes the riff from 'Friend Of The Night' and envelopes it in a whole new world of dirt, and a general seedy atmosphere this album is a smash in the face to everyone who calls post-rock 'coffee table music' and outdated. It's elegant whilst being sordid and masterful whilst being nice enough to befriend you and take you under its wing.

Mogwai have always been held in high esteem since their debut 'Young Team' and many herald 'Mr Beast' as a true return to glory. They'd be right. Not one moment on this album is unnecessary. Not one delayed section over done. No beat played for too long.

Lead single 'Friend Of The Night' offers up the calm in the storm with a serene post-rock classic that smothers you in melody and is the perfect music to relax to. 'Folk Death 95' leads you in gently before pummelling you with the tremendous instrumental force that Mogwai were born to deliver and then 'I Chose Horses' brings in Tetsuya Fukagawa from Japanese band Envy to do some spoken word over a layer of piano, guitars and whatever else they can muster to create something that gets your mind running its own film along with the music. Throughout the ten songs on offer 'Mr Beast' does one single thing continually and that is to offer up a soundscape of music that could easily be stapled to a crazy epic film. They don't offer exact images, but it truly gets your mind imaging people running around, murders, beautiful friendships and many other stark images. To evoke such a strong reaction is a true testament to the pure level of musicianship, song writing and overall passion and energy that pours out of Mogwai at the very fundamental level.

Many have tried to copy Mogwai during their illustrious career, but with 'Mr Beast' ready to hit the shelves they have proved once again why they are at the top of their game. A truly magnificent album that deserves to be at home in your CD collection.