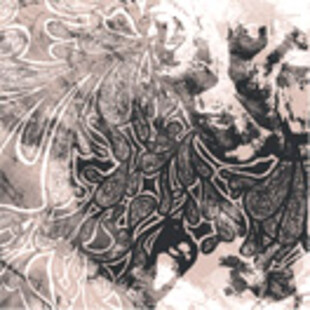 Here at ninehertz, we are fans of the new, and the different and this is no exception.

The merging of two groups into one, London behemoths Hey Colossus and Southend's own Woe, to create the amazing Woe Colossus is showcased here on this heavyweight twelve inch with interesting results.

The first side is meant to be a reworking of the Miles Davis classic 'In a Silent Way' and is built on a lazy stoner-like riff that really builds with the use of saxophones, two drummers and what sounds like a tonne of amps. It drifts in and out of intensity but really hits the spot, maintaining enough interest through its long span, you can tell Hey Colossus are at work here through the guitar tone alone, but obviously the four members of Woe have had a more jazz and improv-like influence on the whole affair and its nice to hear such a daring coupling working so well, let alone be released.

Second side, and more experimental, is 'Vanilla' an apparently original piece that brings to mind moments of Tom Waits and Sunn0)) as unexpected influences. Largely based on a lurching, malevolent rhythm, this track slowly builds as it reaches a noise-like conclusion, its use of unconventional sounds and the same lethargic beat all the way through really create a sense of claustrophobia.

Recommended for those who like any of the previous influences, but for fans of solely Hey Colossus's previous output, be warned, this is far more evil and droning than anything they've done before and I imagine it would be the same live. Visit the State of Distress website before the limited run of 200 disappears.