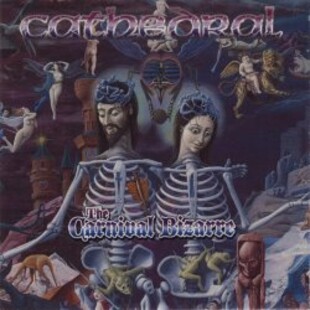 Cathedral, in this reviewer's opinion, are probably the best band to hail from these shores since Iron Maiden. Playing their own individual brand of Sabbath-influenced doom, with other influences ranging from 1970s prog rock to underground horror films chucked into their groove-laden riffage, they are both distinctive and compelling, with an almost medieval guitar sound to boot. An advantage of the diverse influences which go into their music is that none of their albums fall into the trap of sounding like the other ones, each standing alone with its own distinct character and atmosphere to it, yet not forgetting the trademark heavy riffs which are a foundation of the band's sound. If, like myself, your main demand from an album is consistently good riffs with plenty of groove, then it's not too hard to see why this record is widely regarded by Cathedral fans as a high water mark in their career.

I swear that not even Black Sabbath managed to pack so many good riffs onto an album. Even if some of the songwriting here is a little weak at times, it's usually saved by the fact that somewhere in each song lies at least one good, memorable riff, that'll get your head banging and stick in your head for days.

Opener 'Vampire Sun' comes out of the speakers like a bat out of hell, hitting you with an immense groove, much like 'Sweet Leaf' did on Sabbath's 'Master of Reality' album, only more uptempo and-dare I say it?-catchier. Lee Dorrian's vocals take some getting used to at first, and indeed his distinctive style of singing can put some people off this band, but I have no problems with it personally and you can't deny that his voice is one of the trademarks of Cathedral. The singing here is as catchy as the riffs sometimes. Another interesting departure from the metal norm are the lyrics-describing fantastical, otherworldly situations at times, or, as is more evident on later albums, biting religious/humanist commentary. On here though, they're more like a description of the weird and wonderful landscape depicted on the album cover.

After a sample from the film of the same name, 'Hopkins' [The Witchfinder General] kicks in with a riff from the gods and continues to stay insanely catchy and utterly addictive for... well, til eternity really; there's a good reason why this is Cathedral's best known song! Particularly good to my ears is the groovy midsection with more film samples overlaying it. 'Utopian Blaster' has yet more incredible riffing you can't help but headbang to and a bizarre but fun bit in the middle where the band stop, before Dorrian yells "HUGGY BEAR, OH YEEEEEAAAAAHHHHHH!!!!" and then the song kicks back in. It's stuff like this which has led to some people [wrongly] labelling Cathedral as a 'goofy' band, when all it is [to me anyway] is a bit of humor. There isn't anything goofy about the next song though, the slower-paced 'Night of the Seagulls, with another riff that Tony Iommi would be proud to have written; live, this song is, deservedly, a highlight.

Having, seemingly, placed the more straightforward stuff early on, the rest of the album sees the songs getting increasingly weirder. Personally I like it when it works, as in the title track with it's long, drawn out, spacey ending section, or the laidback and relaxing 'Blue Light'. When it doesn't work, however, the songs kind of fall apart slightly- 'Fangalactic Supergoria' starts off ferociously fast and heavy, taking no prisoners at all, but then the riffage loses its edge, and weirdness alone isn't enough to completely redeem the song. Ditto with 'Palace of the Fallen Majesty' -the same thing that marred Cathedral's previous album 'The Ethereal Mirror' slightly for me, which was a lack of good riffage to back the eccentricites and weaknesses of the songs up in large parts, is evident on the second side of this album. It's not bad, but it's not on the money like the first four or five songs here are. 'Inertia's Cave' nearly suffers the same fate as well, but the incredible opening riff, memorable chorus and the cheesy but fun ending [using the riff from 'Moby Dick'] save it somewhat.

The thing that really keeps the album together, though, is that one of the best songs is saved until the end. 'Electric Grave' simply tears, crushes, and dominates, it is THAT DAMN GOOD. The band just find a groove and ride it until you're on the floor begging for more riffs to come. Certainly one of Cathedral's most underrated songs in my opinion, so I was especially pleased when they opened with it at their last London gig. I'm not sure if the second half of the song [seperated from the first by about ten seconds silence] is meant to be a hidden track, but whatever. It rules.