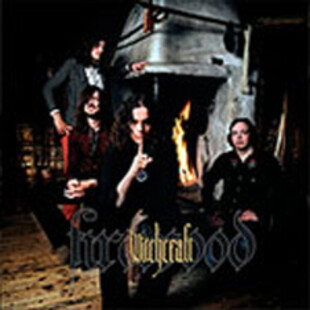 Now I have to confess before starting this review that I am a big fan of Witchcraft. Believe me when I say, Witchcraft deserve every word of praise they get. I am an appreciator of all the wonders they emulate from the classic 67-74 period of heavy rock and I loved their first, self-titled release. I fully expected to love this one too. No surprises here, I think 'Firewood' is great and if you liked the first album I promise you'll like this too. The tough part then I guess, is for me to write a review that doesn't gush with fan-boy adoration and meaningless superlative descriptions. Let's try it.

For those unfamiliar with the band, Witchcraft practice a brand of retro rockery that whilst sounding wholly of an era still manages to sound fresh and exciting and they have developed their craft on 'Firewood' to a much finer degree since the first album. While 'Firewood' retains the warm production of the self-titled release the analogue crackles have gone and the overall sound is crisp, clean and highly polished. The songwriting too, is cleaner and more polished.

The album opener 'Chylde of Fire' kicks off with a good rolling riff and Magnus' familiar vocal wail, crooning about how his "mother was a burning witch and [his] father was a preacher". It sounds strange I know but, it works and if ever there was a style of music that is perfect for tales of witchcraft, wizards and the like it has to be this. It's not all dungeons and dragons though, there are some quite overtly political lyrics too most obviously on 'Wooden Cross (I Can't Wake the Dead)'. The song seems staunchly anti-war but, it's not preachy and fit's in well with the overall theme of the album.

The middle section of 'Firewood' is where the band really show what they're made of with the awesome 'Queen of Bees' and the interlude 'Merlin's Daughter' followed by 'I See A Man' and the melancholy 'Sorrow Evoker', all serving as a warning of what may lie ahead musically for these guys. Witchcraft are one of those bands that I always imagine other bands must secretly hate because they seem to so easily come up with killer riff after killer riff. They'll roll of seven or eight in quick succession and although some come mightily close to sounding like Queens of the Stone Age or Black Sabbath there is more than enough quality and originality for it to not matter a jot.

If the self-titled release was their Black Sabbath/Pentagram album then Firewood is certainly their Black Sabbath/Jethro Tull/Uriah Heep album. It doesn't seem like much of a difference on the surface but, the cleaner sound and more elaborate song structures suggest that Witchcraft are maturing as a band at a startling rate. Their next release could well blow someone's head off if they're not careful.