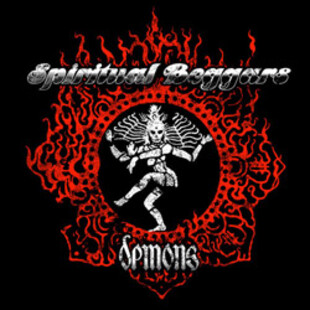 'Demons' is the second Spiritual Beggars album to feature JB (of Swedish Doom/Metallers Grand Magus) in the vocal spot and I must admit to preferring his work with the band over previous vocalist Spice. So how does 'Demons' fare? Are we suffering from JB overdose what with the recent release of Grand Magus' third album (the "Metal as a large metal thing" 'Wolf's Return')? Well, in this reviewers opinion it seems the man can do no wrong. So, on with the review.

The album kicks off with a short instrumental piece titled 'Inner Strength'. It's all slow creeping doomy groove and majestic choral keyboard then BAM! 1 minute 19 seconds later we're into the first track proper 'Throwing Your Life Away'. Suddenly the pace is upped to a mid tempo gallop and JB's distinctive singing kicks in. The lyrics this time round seem slighly darker than previous efforts and fairly reflective: "Can you try to see things my way? Can you listen to what I say? And you keep on crawling back for more. Throwing your life away". Indeed. 'Salt In Your Wounds' is up next and continues the mid paced chugging feel with a simple but effective main riff and a great build up to the chorus. 'One Man Army' passes by in a similar vein but is one of the weaker tracks on the album and could have done with being further down the tracklisting to balance things slightly. 'Through The Halls' slows things down significantly with a very mellow bass and keyboard led verse and some subtle guitar work. JB takes the vocals down a notch here and it works really well adding a slight sense of melancholy to the piece. 'Treading Water' ups the pace again and starts with some nice soloing before going into a stomp-along verse that seems slightly at odds with the more laid back chorus. 'Dying Every Day' leads with a wah heavy riff but other than a few nice touches seems a little by-the-numbers. 'Born To Die' again seems to reign things in and resists the urge to gallop along, it's infused with a certain brooding introspection and the lyrics seem quite bleak. 'In My Blood' is a cracking number with some sinister rumblings from JB, and a fantastic closing minute. 'Elusive' and 'Sleeping With One Eye Open' pass by in a similar mid paced stomp and we've reached the finish line. Album closer 'No One Heard' is another chilled keyboard and bass led piece with a soaring chorus and some fine vocal lines.

All in all 'Demons' is a damn fine album. Maybe not the best of their career, but it has a certain "completeness" to it and the 50 minute runtime seems to sail by. The keyboards seem a lot lower in the mix this time and only really come to the fore in the more laid back moments. Fans of Mike Amott should be pleased with some great solos liberally scattered through the tracks. I doubt it'll convert any non fans but if, like me you enjoyed the 'On Fire' album from a few years ago then I urge you to try this one out. It's a similar beast to it's predecessor but with a slightly more sinister edge to it.