Om Variations On A Theme 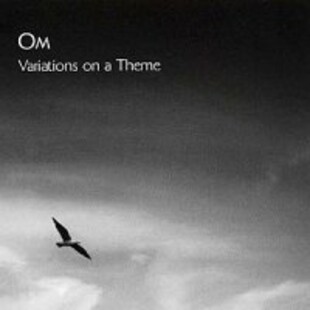 Well, this album is STRANGE. The music consists of drums, bass and vocals (no guitar features in the mix at all) and the tracks are all pretty hefty time wise (1. [21:16 mins], 2. [11.56 mins], 3. [11.52 mins]). However, given this seemingly impenetrable combination, I found this album uncannily easy to get into.

Of course, when you throw the names Al Cisnero and Chris Hakius (ex Sleep rhythm section) into the equation, things start to make sense. Sleep's epic 'Dopesmoker/ Jerusalem' (totalling nearly 65 mins and plunging the band into a fatal battle with their label) being the last, and, arguably the greatest, musical achievement of the band's rhythm section; Om's 'Variations on a Theme' is the first release from either Hakius or Cisnero for nearly seven years, and has generated a large amount of excitement, and apprehension, from fans of the posthumous Sleep.

Given the huge cult following of Sleep it would be fair to say that this release has BIG shoes to fill. But this is not Sleep. Om is an entirely new entity and, it would appear, has no intention of carrying on any pretence of a former glory.

Sure, the powerful fuzz-bass evident on previous releases is in place, as is the Sabbath esque vocal style, but the actual music has a very different vibe. The most noticeable differences are the pace of the music and the nature of the lyrics. Where Matt Pike's High On Fire (ex Sleep guitarist) developed a fast, furious style on exiting the band, Om, if anything, have got slower. This emphasises the droning bass and rolling drums, giving the music an almost hypnotic feel in a similar vein to releases by 5ive only less spacey. The lyrics are far removed from Cisneros' dark space-rock roots, and seem to be more preoccupied with spiritual imagery, being chanted in a monotonous and almost prayer like style. Believe me when I say you could found a religion based on this sort of music! The chant, lyrics and hypnotising bass have a strange effect that draws you into the music. The REALLY odd thing about this is the relative simplicity of the actual structure of the tracks is not boring, as you might suspect, and serves to make the album atmospheric in the extreme.

The individual tracks are actually fairly similar in style but the choice bass riffing and curious drum techniques kept me interested right to the albums close, especially in track three, 'Annapurna'. The first track, 'On the Mountain at Dawn', has to be my favourite though; the bass riff in between verses is incredible and the imagery in the lyrics is truly transporting.

I have to admit though, I'm not sure whether to categorise this release as an EP or an album as, despite its 45 min length, it doesn't really seem to have a closing and seems a bit open ended. However, after a couple of weeks of incessant play, I still find this release enthralling. Certainly not plastic or boring. If you like your doom (I use the term loosely) fresh and experimental then this album should definitely be of interest. It's not such a good buy if you don't like long songs though.

What is most impressive about Om, in my opinion anyway, is the obvious passion and honest approach Hakius and Cisnero have taken in the stylistic production of this album. It is obvious, simply by the unorthodox nature of the music, that they aren't doing this because they're short on cash. There seems to be a genuine respect and connection to the music they create which is rare in the industry. For this attitude alone I find 'Variations on a Theme' difficult not to admire. Definitely a worthy addition to any serious music lovers record collection.

Forums - - Om - Variations On A Theme