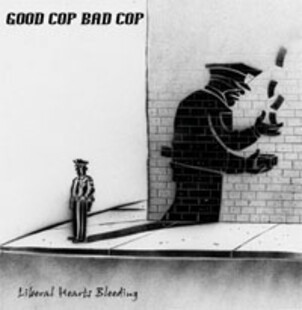 Containing ten songs and a bonus track, 'Liberal Hearts Bleeding' is nothing if not a generous release. But does it hold up - the length would count for nought (possibly even being a negative) if the songs weren't up to scratch. The answer is yes, just about.

The mood is similar to that of Good Cop Bad Cop's fellow midlanders Old Basford, with a blues rock groove filtered through with a heavier-hitting tendency. There's a definite Led Zeppelin feel with a more modern stoner rock influence to the whole thing. There are several good (and some great) moments on offer here - the problem being that they aren't always exploited well enough to create good songs. Occasionally, a good riff is spoilt by a cheesy lyric, or an enticing opening fails to fully deliver across the whole track.

The vocals are hit and miss also. When dominating a track, in an almost Robert Plant style manner, they come across forced and never really hit the mark. The more restrained vocals of other songs fare much better, blending in nicely with the music as if an extra instrument.

When they get it right, Good Cop Bad Cop are an exciting proposition. Tracks like 'Never Before', 'Bittersweet Freak' and the huge 'Bullet for the Righteous' can summon comparisons to Unida or even latter-day Corrosion of Conformity - and if you ignore the odd annoyance here and there in between, you've got a pretty solid release, and a definite platform for the band to flourish.