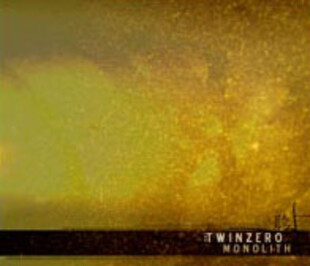 Earthtone9 were one of the truly great bands to come out of Britain in the past 10 years, and although many mourned their splitting, perhaps it's best they went out with the still untouchable 'arc'tan'gent' before doing anything to mar their faultless record. There have been high expectations for every offshoot band since, and all have sadly failed to live up to these. The Blueprint, while a perfectly capable hardcore band, only occasionally displayed the genius that Earthtone9 spread over everything they did. So what of Twin Zero?

The selling point for most will be the presence of Karl Middleton, Earthtone 9's incredible singer. His voice is the main focal point throughout the album, alternating between perfectly controlled screaming, harmonized choruses and soft atmospherics. The interplay between the guitars is also excellent, and while never quite hitting 'Oceanic' levels, works incredibly well. There's also some death metal-esque keyboards from the improbably named Dave Cheeseman which are sparsely used and never come across as being forced.

The centrepiece of the album is the 22-minute title track split into six parts, (seven if you count the tension building instrumental piece at the start of the album,) and it's great. It runs the whole range from bone-crushing heaviness to laid back beauty and runs through most points in-between. While occasionally it doesn't feel like one completely cohesive track, the seams between most of the songs are pretty much faultless. Personal favourites are Parts 005 and 006, the calm and atmosphere of the former reminiscent of the more laid back moments the great Neurosis have of putting into their tracks, all tribal drums and soft melodies before 'Part 006', opens up and pounds the unsuspecting listener with some amazingly heavy drumming and screaming. The heavy sections have all the more power for being held back, and the rest of the album is innovative enough to hold interest throughout, and it's this that sets the band apart from many others currently doing the rounds.

It seems like Twin Zero have tried to make an 'epic' album that can hold it's own against genre classics like 'Times of Grace,' 'Until Your Heart Stops,' and 'Sky Valley,' as well as to realise the aim of most ambitious bands; making their own 'Dark Side of the Moon.' While it doesn't succeed on all counts, 'Monolith,' is an triumph on every level and a worthy addition to the record collection of any stoner/whatever fan, and the closest any modern British band has come to matching the brilliance of 'arc'tan'gent.' File it between your Neurosis albums and 'Panopticon.'

As much as I love the album and the maturing genre of epic heavy rock, can we please stop naming bands/songs/albums after 'big' words? You know what I mean. Leviathan. Mastodon. Behemoth. Monolith. Australasia, Oceanic. It's becoming a bit of a cliche. As a precaution, I've registered the following words so no-one else may use them; Leviamoth, Gargantuadon, Behethan, Monomoth, Enormalasia. Anyone wishing to use these must pay me royalties. Otherwise, keep up the good work.