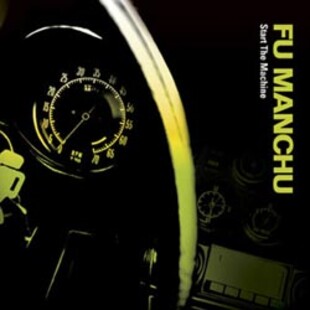 To these eyes at least, Fu Manchu are kings. From the beginning, with the release of several EPs and the No One Rides For Free album, to 1995's brilliant, genre-defining In Search Of... long player, Fu Manchu were the coolest band on the planet. Fuzzed-up, riff-heavy songs, lyrics either about cars or girls, (or occasionally UFOs), with pictures of drag races and dune buggies adorning the cover...they were the band that got me into stoner rock in the first place. Changes were afoot however. Band members left acrimoniously (mainly to go form Nebula), Brant Bjork, formerly of Kyuss, moved from producer to behind the drumkit, and, significantly, the production values of the following albums were to be increased, leaving behind, possibly for good, the underproduced fuzz of their previous output.

The result, produced by White Zombie guitarist J Yuenger, was The Action Is Go, and despite the pre-release fears of long-term fans, it is an absolute gem of an album. The production in fact helped, giving weight to the songs, which were possibly the best collection they had ever released. Finding their music being played by an ever-increasing number of people, Fu Manchu were at their most marketable. Unfortunately, it appears it was their creative peak as well. Since then, with the notable exception of the stop-gap Eatin' Dust (practically an extension in sound of The Action Is Go, and containing the brilliant double header of Godzilla and Pigeon Toe, the heaviest thing they have ever written), it has been all downhill with their output. 1999's King of the Road was met with a mixed reaction with fans hoping it was a temporary blip, but when it was followed up three years later with California Crossing - basically more of the same but less, the fear was that one of stoner rocks flagship bands was on its last legs.

It is worth noting that King of the Road and California Crossing are not bad albums at all - they just don't offer anything new or exciting. Yet there's a contradiction here - hasn't part of the appeal of Fu Manchu always been that they stick to their formula? It just appeared that they were resting on their laurels - nothing new was being tried, and the inventiveness of The Action Is Go, the stop-start guitars, the moog-infested trippyness of 'Saturn III' were all gone with variations on the same Fu Manchu formula in their place.

As they say themselves 'Every night, every day, it stays the same, things never seem to change' - the chorus from 'It's All The Same', ironically the track that deviates away from the norm the most on Start the Machine, and proof indeed that Fu Manchu, if not back to the best, are on the road to recovery.

Start the Machine will not go unheard in the background. Excellent opener 'Written In Stone' instantly grabs your attention, kicking off in, if not untypical, fine style. Fourth track 'Make Them Believe' is even better, beginning in a chilled manner, before launching into an enormous riff that comes with a guarantee of making you smile and nod your head. Instantly it is noticeable that there's definite stand out tracks that help break up the sound of the album so that the end of one track doesn't meld into the beginning of the next - a problem with their last two efforts.

You couldn't call the rest of the album filler either - there's a different mood of Fu Manchu trying to poke its head through the creative mix here - a harsher tone in places that helps the separation of tracks to be defined. Perhaps this can be credited to the bands obvious love of hardcore - as evident in the cover of Black Flag's 'Six Pack' on this year's Something Beyond EP. Changes can be found lyrically too. Scott Hill seems to have taken a different course all together this time around - no longer every track about racing, but an angrier, questioning side appearing. Just looking at some of the track titles shows this - 'I Can't Hear You', 'I'm Getting Away', 'I Wanna Be' - all in the first person, reflecting a more introspective offering this time around.

The album is further varied by 'Out to Sea' (which wouldn't sound out of place on former drummer Brant Bjork's Jalamanta album), Start the Machine's obligatory mellow track - something Fu Manchu have always done well - from No One Rides For Free's cheesy 'Free and Easy (Summer Girls)' through In Search Of's superb 'The Bargain' and on.

What it all adds up to is a very varied platter, which is enjoyable throughout. Start the Machine will go a fair way to appeasing those long-term fans that haven't really listened to the band since The Action Is Go. With Fu Manchu still a spectacle to behold in the live arena, even during the California Crossing tours, and having played with some excellent bands across the States recently, Start the Machine provides a strong platform for the band to reclaim (in the near future, if not right away) the crown that is rightfully theirs.