While Heaven Wept Of Empires Forlorn 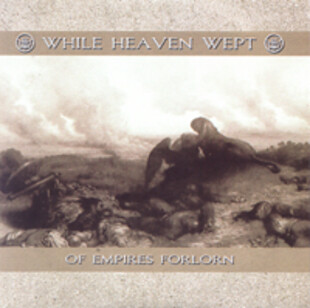 Misery has to be done well to sound good, even better to sound uplifting, and While Heaven Wept more than do the job. Opening track 'The Drowning Years' manages to lift your mood with its epic choruses and fantastic solos, as well as having dark subject matter. Lyrics like, "Once I had hopes, loves and dreams / Now they've sunken into the sea, I drank them all away" have an obviously personal and haunting feel to them. It should come as no surprise, then, that While Heaven Wept singer Tom Phillips has indeed recently admitted in the press that he is an alcoholic. The title track follows suit, and while the use of keyboards in doom has often been debated, here it works to WHW's advantage, the swathes and washes on display underpinning the almost power-metal feel of their unique sound.

This band has had a string of different members over the decade they have been together, and it shows that perfectionist visions can pay off, this album is close to perfect production-wise, the guitars have enough bite without being too loud, the vocals soar majestically and the keyboards offer something traditional doom instruments cannot. A reworking of an old Jane song Voice In The Wind' shows a mellower side to the doomier elements and a cover of Candlemass' "Epistle No.81" completes this varied and complex release. Fans of My Dying Bride and Paradise Lost should add this to their lists post haste. Some have called this a landmark release and they are right, this shows a marked improvement in doom as a genre, the introduction of keyboards and synth into the mix at such a prominent position does wonders for this bands unique and captivating sound. Investigate.