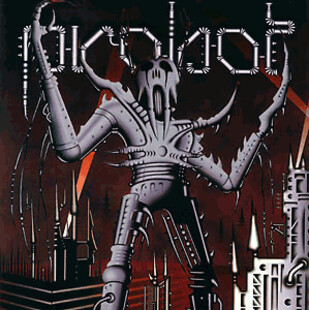 I suppose we all know the story behind this by now - famous multi-talented bloke likes metal, never recorded any, so he writes a load and gets an all star cast of vocalists to pop round and do their thang. The public go crazy, the end. It's a mini adventure... Well, not quite - there's still the small question of whether it's any good. It'd be all too easy to get lost in the hype surrounding this release, and forget about the most important aspect - the music.

Which is a bit of a mixed bag stylistically, as you'd expect, and sometimes that ends up detracting from the whole. Most of the songs owe a great deal to the work of the guest vocalist in question - it's almost like a tribute compilation at times. A bigger problem, though, is that, like many comps, it's also a mixed bag in terms of quality. Opener 'Centuries Of Sin', featuring that Geordie loon Cronos starts things off nicely, coming on like a cross between Venom and Entombed, but then things go off the boil. Max Cavalera's 'Red War' regrettably owes more to Soulfly than it does to classic Sepultura, and 'Shake Your Blood' sees Lemmy going through the motions in a weak Motorhead by numbers job.

Things pick up a bit with the arrival of Lee Dorrian and 'Ice Cold Man', a classic Cathedral style doomy romp. Then Wino and, later, Eric Wagner also put in solid performances for the stoner contingent, which, oddly enough, sound like St. Vitus/Obsessed/Spirit Caravan/Hidden Hand (delete as appropriate) and Trouble. A slight disappointment is that Tomas Gabriel Fischer's billing as Tom G Warrior doesn't herald a full on Celtic Frost-tastic affair, but Snake (Voivod) and the ever amusing King Diamond make up the slack in reasonable style.

Overall, though, this remains unsatisfying as an album, for a couple of reasons. Firstly, there's the aforementioned compilation feel, but this could have been overcome if all the tracks had been classics, of which it has none, to be honest. So the question must be asked - has Dave Grohl attempted a bridge too far, in writing all the music himself? I, for one, would have liked the guest stars to contribute more than lyrics. As it is, Grohl's writing talents are spread a little thin, and it becomes painfully obvious just why he's never released any metal before.