Orange Goblin Thieving From The House Of God 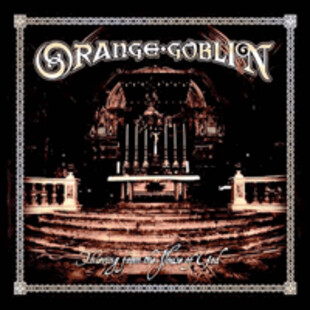 WOOOO!!! A new Orange Goblin album! The big boys are back, and it's time to rock, boys and girls...

Well, this effort comes after a period of some considerable upheaval in the Goblin camp. They've had to contend with life as a four piece after the departure of rhythm guitarist Pete O'Malley, and their last album, Coup de Grace, was not particularly well received in some quarters - I know a lot of people who felt that the move away from the stoner/doom stylings of their first three albums was not a good one. Personally, I really enjoyed it. I hadn't really seen The Big Black as the unmitigated triumph that many had made it out to be, and it was good to see the band attempting something a bit different. It still had the same swagger and groove of the previous efforts; they were just rocking out a bit more.

So, Thieving... arrives bearing the weight of considerable expectation, based, for some, on a desire for a return to form, and, for others, on a desire for previous heights to be re-scaled. The label are pitching it as something of an encapsulation of all that has gone before, bringing together all the disparate elements present on previous albums. No small feat, if they can pull it off.

The album gets off to a roaring start with 'Some You Win, Some You Lose', a track that could have come straight off Coup de Grace, all rock'n'roll swagger and cocksure lyrical suss. Great stuff. More like this please, and I won't give a damn if you get any bits of the other albums in at all. But then, sadly, it all starts to come apart, and the next couple of tracks fly by in a bit of a blur - not that bad, but in no way memorable. And then, just in the nick of time, we come to this album's absolute, stand out classic, 'Black Egg'. It kicks off with a hummable, bluesy riff at a proper neck popping rhythm, and Ben adds a solid vocal line of the type that he should probably think about patenting. So far so good, but the boys pull out their secret weapon about after two minutes, in the shape of the amazingly gifted voice of long time Goblin/Hangnail collaborator, Katti Heath. Her contribution lifts this track head and shoulders above those around it... well, it's not everyone that can sing like a guitar solo.

Unfortunately, the momentum thus gained is just as quickly lost. 'You're Not The One (Who Can Save Rock'n'Roll)' starts well, with a distinct hint of 'The Man Who Invented Time' (from Time Travelling Blues) about it. But then it just drifts off into Goblin by numbers, and this time there's no recovery until the awesome doom riff that makes up the last five minutes of final track 'Crown Of Locusts'. To be honest, even the first half of that song is something of a blank to me as I sit here writing, just as the six tracks that precede it are.

And that kind of sums up this album - a very few moments of genius, that utterly eclipse everything around them. There's nothing particularly wrong with any of the other songs, but they fail to have any lasting impact once they've finished. To be honest, though, the production must be held partly responsible - a disappointing mushiness masks the guitars, and the vocals manage to be both overbearing and tinny at the same time. Very odd, when you consider that Billy Anderson is responsible for classics like Neurosis' Through Silver In Blood, not to mention the Goblin's own Big Black. There's an overall, amateurish feel about this recording that belies the stature of both band and producer, and does neither any favours.

And then I'm brought back to the quality of the songs. If they were better, would the production matter so much? Or, if the production were better, would the songs sound improved? Who knows. All I can really say is that the mark has been missed by some way here. This isn't a return to form, if anything it's a loss of it. And while they do manage to demonstrate that they haven't really moved that far away from their roots after all, they do so at the risk of sounding like they're starting to run short on new ideas.

I put off writing this review because I really, really wanted to like the album, and I can only hope that these songs grow on me a little more once I've heard them played live, as I've listened to this album every day for three weeks, to no avail. A guy I know often jokingly refers to Goblin and their ilk as 'pub rock', a tag I've felt to be hugely unjustified in the past. But unless they can do better than this is in the future, I have a horrible feeling I may end up agreeing with him.

Forums - - Orange Goblin - Thieving From The House Of God