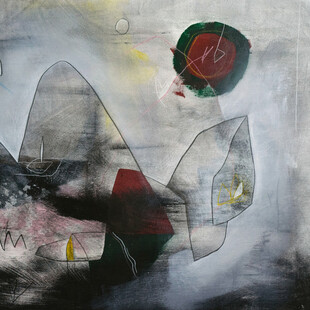 You know when a car drives by and you hear a snippet of something interesting blasting out the stereo? It could be a mindless chunk of gabba, a whiff of a pop song, a moment captured and with a fizz it's gone? That's the kind of spirit that the ever-inventive Sly & The Family Drone have gone for here.

Fresh from their 2019 LP Gentle Persuaders and a collaboration with Dead Neanderthals, their new album Walk It Dry sees an even more honed, tight, sinewy Sly emerge. The band themselves admit they have erred towards shorter songs, but they've lost none of the agoraphobic feeling they've always conjured up. If it's possible, these tracks are less densely layered too, 'instruments' have their own space, free to stutter or create crossing beats as the mood takes them.

A disclaimer, Sly's music is by its own existence, obtuse but the sleek combination of noise, percussion and saxophone always makes for a hearty mix. For this reviewer, it's always been the images that this band whips up from simple sonic experimentation. The second track in, Dead Cat Chaos Magician for example, sounds like scientists cooking up something devious in a lab, bunsen burners and bubbling test tubes to cure an indefinite disease, the wobble of synths or samples going a long way into creating a tangible vision.

Elsewhere, the industrial percussion takes the lead, Bulgarian Steel allows a wailing sax to weave a path while the drums clatter and punctuate a fictional and factory-strewn landscape.

The live spectacle of Sly is always something I mention in their reviews, but you can imagine that these songs take a little bit more in the way of planning. They hinted at structure playing more of a part on Gentle Persuaders but this takes them into tighter, more song-based pockets.

Crescendos roll towards you in waves on the excellent Shrieking Grief before noise takes over and the chaos that we're used to takes hold again as it mutates and locks into a magick groove.

More sinister and almost, dare we say, Spaghetti-Western is the stretched out bleakness of closer Tsukji which wanders through a desert strewn with broken cymbals and a drone-inspired horizon.

Sly are just so inventive it's almost too much to take in at points. One for multiple listens and introspection. A leaner, but no less fractal beast, Walk It Dry is the world turned inside out and inspected in close up. If I happen to walk past a car blasting this I'm jumping in a taxi to follow it.