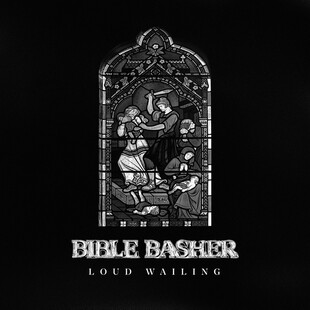 Plague, pestilence and ruin, the Old Testament can be brutal. For some people, Jesus is where it's at when it comes to the bible, but seriously, take a look through the original text and there's bloodshed, torture, the works. Netflix has nothing on the drama that unfolded within these pages.

Little wonder then that the hugely inventive Kurokuma and Sheffield friends have started this cloaked project that takes bible passages, twists them into metallic shapes and presents itself as an epic, churning maelstrom of unholy terror.

The immediate influence on this seems to be early Nile or perhaps the more subtle side of Morbid Angel.

The plodding and deliberate sounds of So Samson Sang and Burning and Blackened could easily fit in with the Egypt-obsessed death metal masters' first two EPs. The biblical influence gives this a similar Ben Hur prowess and feels cinematic and vast. Add to this the fact that all the lyrics are directly lifted and seemingly chosen for their apocalyptic charm and you have something that stands pious and glorious above your usual run of the mill sludge.

Tich (Temple of Coke) and Joe of Kurokuma may be the mainstay of this band, but the vocalists change for each piece, so we have the death growls of George, colliding with the epic pipes of Bing (ex-Psython/Hiram), Craig from Archelon and Chris Hardwick (he of Spaztik Munkey and Gizzardfest). It's a real showcase of the talent in Sheffield/Rotherham and if they follow this guest pattern for future releases, we're sure to be in for a treat.

The release also feels prescient, with global riots and a pandemic changing everything, the lyrics in particular have a resonant warning under the surface, Plagued for example is direct and the screaming of 'There was not a house without somebody dead' feels eerie and a bit too on the nose for comfort.

Using biblical verses in metal is nothing new, but Bible Basher manage to make it seem so. Grab a tape before they sell out via The Sludgelord, because they will.