Goblinsmoker A Throne in Haze, a World Ablaze 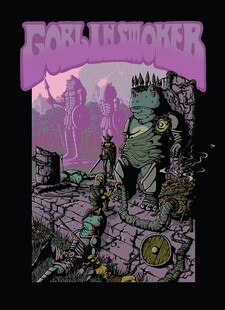 Did you hear it? The sound of several hundred stoners and doomed souls atuned to the UK underground as one creaking their backs as they sit up straight, raising their eyebrows lethargically yet with more energy than they manage most days, slurring an unintelligible yet approving grunt... That was the collective effect of Goblinsmoker's last release, a decrepit exhumation from the earth, croaking forth, furring arteries and ear canals. It yielded an instant impact.

Here they provide a follow up relatively quickly, which will allow them to stabilise the ground so quickly gained and leap forth into new territories, to corrupt new minds. It flows on from the Toad King, three more tracks, the same artwork, a continuation of the lyrical theme of that debut title, the amphibian character dreamt from warped minds.

Smoked in Darkness begins, quickly into grand, fuzz high tripped out doom, a touch of Electric Wizard yet within a grimy overgrown covering of moss and weeds. The screeched vocals creep out from the shadows, the riffs dragged along, suitably slow, allowing you to wallow trance like as it drudges along. I love it.

Let Them Rot increases the dread. The opening conjures Lord Mantis style nightmare plains, a horrible stench arising there forth, a track that doesn't really go anywhere, but intentionally so - trapping you in a looping doom vision of bleakness and latent unnerving threat. The Forest Mourns provides more of the same. It is maybe the weak link of the three, but only just, there's a hint of Return Trip and distant sludge undercurrents bubbling below the blatant doom hulk.

Each track provides ample to warm doom hearts. Even within the lethargy, there are blasts on each where they open the flaps on riff-happy romps and unexpected charges, to keep you on your toes. There's also an indirect first wave black metal feel throughout, and naturally it provides heavily for all the staple doom elements - the decay, the apathy, the fuzzed torpid guitars, hatred in the vocals yet along a fantastical theme. Yet there's little thought as you listen given over to whether it provides anything new - it doesn't seem to matter, because few nowadays compile the elements as well as this.

Forums - Reviews and Articles - Goblinsmoker - A Throne in Haze, a World Ablaze