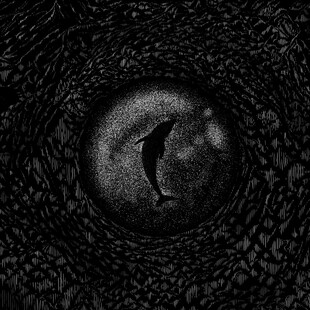 Full disclosure, I'm a fan of Kurokuma, to the point where I think I've reviewed all of their material so far with such enthusiasm and excitement that is unbecoming. If they are one thing, one constant throughout their time as a band is that they are original. This latest release, a split with the equally unnerving and incredibly talented Under is no less of a surprise and must-hear.

I'll deal with Under's side first as they deserve equal praise. Their side of the wax (courtesy of the esoteric Astral Noize Records) is one of their most daring yet, and that's saying something. Under confused me a few years ago, I couldn't get a handle on their strange compositions right away and knew it might take some more exposure live to really hit home and with the album they released, last year's Stop Being Naive I finally understood their miasma-like approach to metal.

Their track here, the sprawling Abyssal Gigantism suggests they are not stopping their jackhammer-style assault any time soon. A three-piece perfectly attuned to each other, their music crosses a dreamy chasm between almost grunge/alt rock experimentation and the wilder side of black and extreme metal. To give them a label seems unfair, so I won't, but needless to say they will flip through several influences within just a few moments.

This deep, skewed approach to songwriting makes them incredibly intriguing, blasting sections give way to swirling noise and washes of keys, effects and ambience. The maelstrom they create is dizzying and warrants several listens before all the details reveal themselves to you.

The Kurokuma side follows a fascinating concept, taking inspiration from the theme tune from classic Mega Drive game Ecco The Dolphin: The Tides of Time. The game, as I recall, was an underwater adventure deep with exploration and with an environmental theme acting as a warning, quite forward thinking for the time. This interpretation is a lovingly-crafted metallic affair, but manages to blend drummer Joe's love of chiptune in there too. There's a subtle layer of keys or effects under the double kick and guitar that stay true to the original theme.

The guitars also stay true to the theme (take a listen here) which means its a faithful tribute to those composers who were working with limited chipsets back in the 90s, but were still able to create music that filled players with dread and awe. It's a song that will likely fit into Kurokuma's varied sets when they grace the stage again with force next year.

Split releases are always a fantastic experience, especially when there's something of substance from both parties. A statement of intent? Perhaps. There's promises that Under's next record is going to be their most complex yet and Kurokuma have already started booking in dates across the world.

Go and grab this before it vanishes from the Astral Noize store.